In Berryz Kobo's 7th anniversary photo book, there's a 'news article' on the 'Berryz Note'. To those who aren't familiar with the Berryz Note, it's a notebook that was passed among the members when Berryz Kobo first started out. They also had 'Berryz meetings', where they'd sit down and discuss about the group. Both of these are often mentioned by the members when talking about the early days of the group, and they tend to be credited for keeping the group of primary schoolers in line when they were first starting out. These days, it's in the care of Captain. This is one of the rare looks at it. 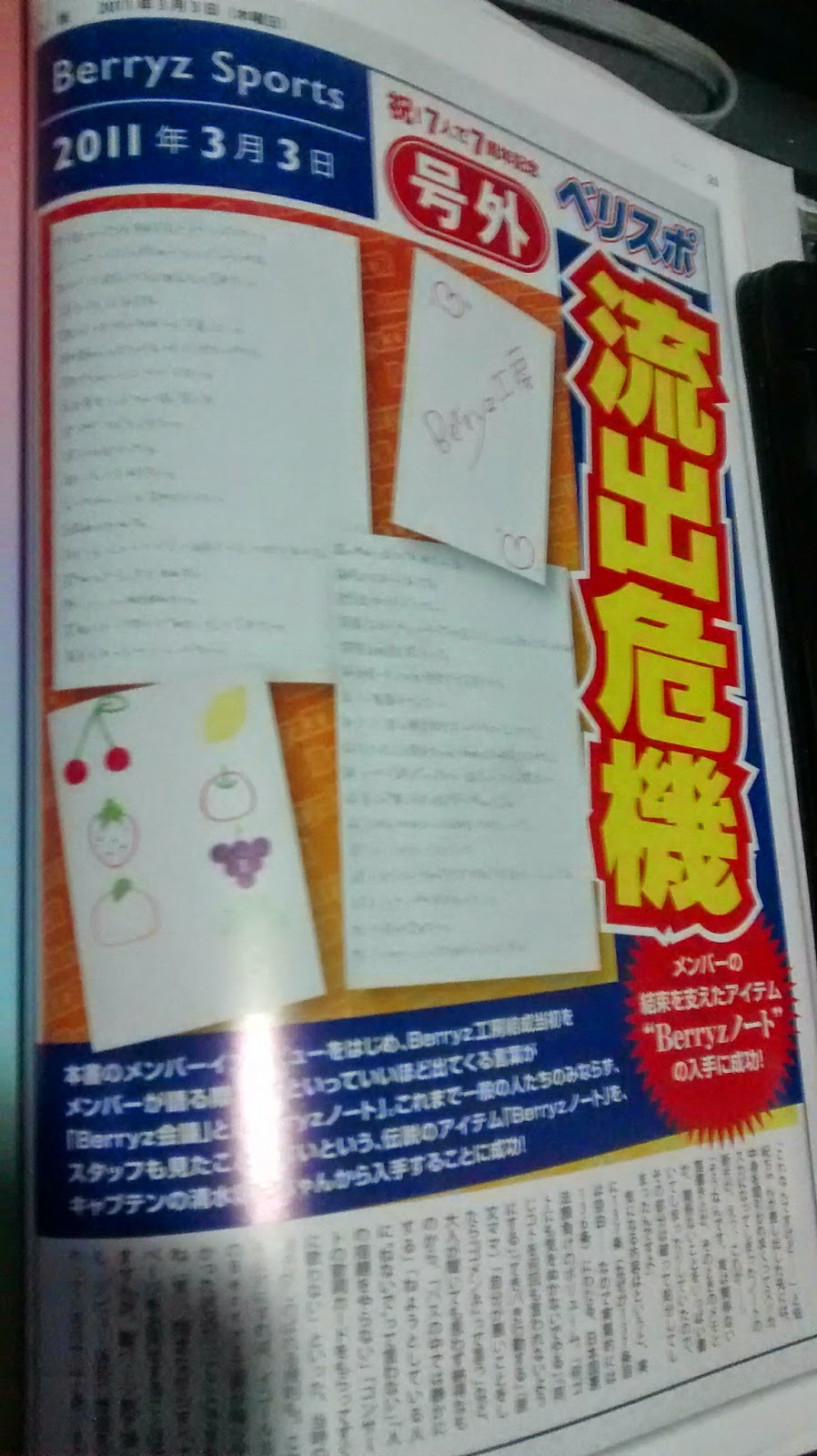 As we started with the interviews in this book, when the members talked about the initial formation of Berryz Kobo, the words that almost surely come up are 'Berryz meetings' and 'Berryz note'. Unseen by the general populace up to now, not even seen by the staff, we have successfully obtained that legendary 'Berryz note' from Captain Shimizu Saki-chan

Here are some parts of what's written in the pictured extracts of the notebook. They're actually pretty hard to read, being handwritten and in 'kiddy' language, but the internet provided (here, see 674 & 677)


19 When being cautioned、 concentrate。→ Do not raise your hands。
20 Even at rehearsals, don't cut corners. Do things seriously。
21 When talking about trivial things, do not ask 「Say that １ more time」。
22 Act promptly。
23 Don't advise people on things you can't do。
24 When working, do not get angry even if there is something that you dislike。
25 Do not lean on others when sleeping。
26 Be firm in responding。→ Answer quickly。
27 Do not step on things like cords。
28 Do not apply make-up yourself。
29 Do not varnish with nail polish。
30 Do not put luggage on top of the sofa。
31 Gather all the luggage together。
32 Knock on doors→ If so, give a reply。
33 If you say 「I give up」, give up。
34 Do not use other people's things as you please。
35 Do not tell people who are sleeping 「Don't sleep」。
36 Do not place your feet at places like the top of desks。

55 Before concerts, be cheerful。
56 Look at the clock and take action。
57 Do not get mad even when giving advice。
58 When in the middle of changing outfits and there are people outside, stop changing outfits and quickly get inside
59 Bring writing implements。
60  As much as possible, everyone should be involved in tidying up rooms。
61 Do not do the homework of others。
62 Do dance and singing practices (reviews) seriously。（ＭＣs too）
63 Do not think 「That's obvious」。→Do not forget how you felt when you started。
64 Do not play around with the microphones。→Even when checking the sound×。
65 If you do something bad, say 『I'm sorry』。
66 When doing a concert recording, bring along the ＭＤ・ＣＤ。
67 Go （enter） toilets by yourself
68 At interviews, try as much as possible to not say the same thing。
69 Do not turn back when on the Shinkansen。
70 Do not badmouth people。
71 When riding buses （taxis）, fill them up from the front。


'What is this......' I said to what Saki-chan was holding out in front of me, fragments of a notebook that had turned hollow, its contents thinning out. Eh, this is......

'That's right. Actually, there's things like unrelated scribbles, notes taken at the time, lots of irrelevant things were written on it, those parts were torn out and disposed of''

Speaking about interesting content, it indeed would cover the 137 articles (For some reason, the 137th article is blank...... And so there are 136 substantial articles), a volume that beats even the Constitution of Japan. From entries like  'Whatever it is, do it without losing steam' 'Do things without being told the same thing over and over' 'Act promptly' (as per original), 'If you do something bad, say 『I'm sorry』。', things that grown-ups couldn't help but agree with, 'Keep quiet in buses', 'Do not tell people who are sleeping 「Don't sleep」。', 'Do not do the homework of others', 'Do not immediately sing when you receive the lyrics sheet for a concert', these regulations bring to mind how they were. If they were opposed, that would mean Berryz Kobo would be in a bad state (laughs). Sadly we are unable to show you all the pages, but with the pages you can see, I think you'll be able to experience how they were like when they freshly made their début!
at 15:41:00