2ch: My girlfriend asked me 「Between Karin-chan and myself, who's more important？」, and I got dumped when I answered 'Karin-chan' 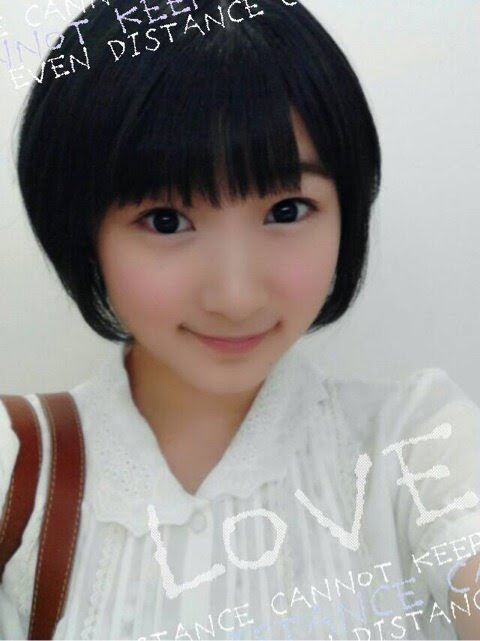 Girlfriend「That's what you're doing？ In front of your girlfriend?」

Girlfriend 「Between me and that Karin girl, who's more important？」

Girlfriend 「You're hopeless、 you're saying that an idol you can't go out with, is better than your girlfriend？」

Me 「It's beyond reason, that's why」

Girlfriend 「You're delusional about idols… What if she betrays you someday？」

In TopYell+ H!P edition (March 2014), there's a segment that's referred to as the Hello! Pro great dictionary - basically your run of the mill questionnaire.
Although it's set out by person, I'm arranging it by question instead.
Just so you know, not going to be following the proper question order either.

Without further ado:
Q2. Among all of Hello! Pro's songs, which song makes you most excited?

Here's a round-up of the press-conference Miyamoto Karin held on the 20th of June in commemoration of her photo book's release. 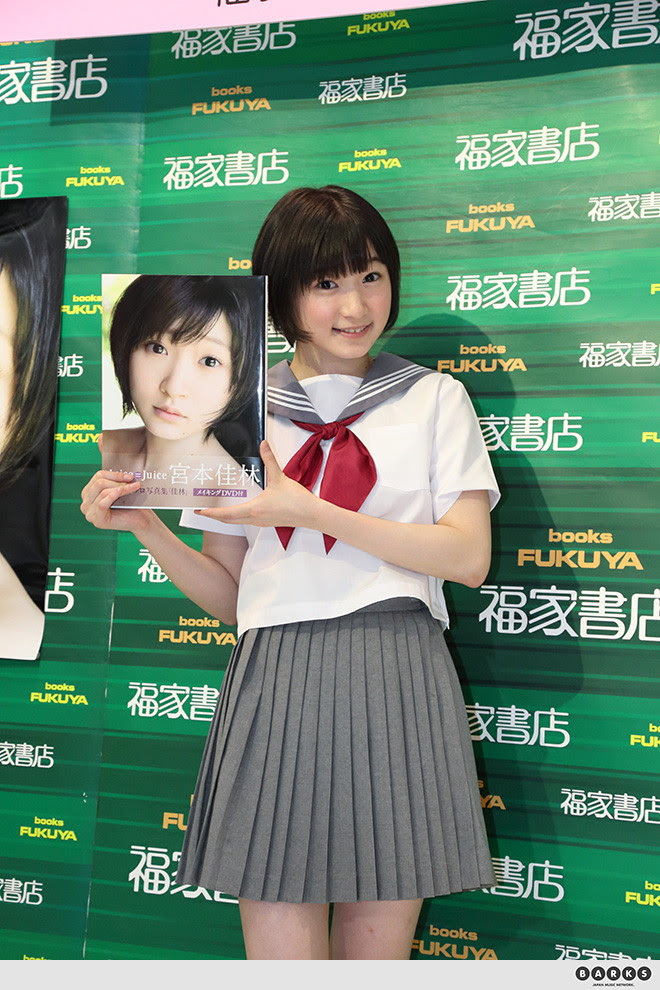 31条 西瓜に塩は絶対に付けない！！
Article 31:  Do not add salt to watermelons under any circumstances!! Tsunku♂ reflecting on the past


@kako0306: @tsunkuboy  Tsunku♂-san, recently I've come to understand the true meaning behind 「Tomodachi ha Tomodachi nanda！」and 「Ganbacchae！」。 Besides that, listening to other songs I haven't heard in a long time, I hear them in a different way。
@tsunkuboy:  Seeing those words made me go through the lyrics again。 「Tomodachi」 is pretty deep。

So, Rev.from DVL.  For a good introduction to the group, I recommend Serenyty's write-up on Happy Disco. Even if you aren't familiar with the group, you've probably heard of the 'one-in-a-thousand-year prospect' Hashimoto Kanna, who's a member of the group.

Below will be my translation of their major début single, LOVE-arigatou-.

These 2 lovely young ladies have both come out with photo books this month. In their honour, here's a summary of a discussion these two girls had near the end of last year.
This comes from Hello! Project Station episode #43, which aired on the 27th of November 2013. It was part of a discussion segment between the members of Juice=Juice and a selected Hello! Project senpai.
I've also done a summary for the discussion between Suzuki Airi x Kanazawa Tomoko.

Now what's left for me to do is to wait for a package from Amazon Japan bearing my name. Inside it, the latest photo collections of these two beautiful belles.

In TopYell+ H!P edition (March 2014), there's a segment that's referred to as the Hello! Pro great dictionary - basically your run of the mill questionnaire.
Although it's set out by person, I'm arranging it by question instead, as that'll be more impartial (i.e. I won't just do Momo and Airi and not bother with all the others).
Just so you know, I'm probably not going to be following the proper question order either.

Without further ado:
Q5. If you would bring yourself to think about it, who would make up Hello! Project's best pairing?

{This was early in the year, so the girls are talking about their hopes and plans for 2014.
Yeah, this is about half a year behind.
Apologies for the weird timing, I'm clearing up my drafts at the moment.
And, you know, it's ℃-ute looking great, which is reason enough to share it in my mind.}

{Whole list is here, and previous summary is here}

11条 シャーペンの芯は、1本ずつ入れる
Article 11: For mechanical pencils, put in one piece of lead at a time

15条 ショートケーキは、苺を一番はじめに食べる
Article 15: When eating a shortcake, start with the strawberry 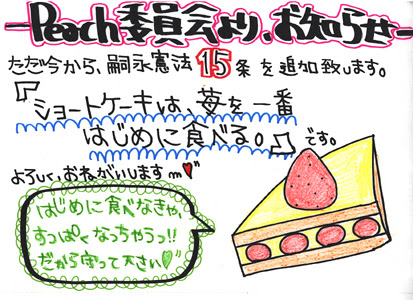 {So some people be saying that Cap'n ain't enough of a leader for Hello! Pro. While I don't be disagreeing with Maimi, the generally proposed alternative, I feel that they be disrespecting the Cap'n, saying that she ain't much of a leader. I ain't the type of Jigglypuff to be engaging in debate,but I'd like if ya got a taste of the trials 'n tribulations of this girl stuck at the head of 7 girls, with their very scattered personalities.} 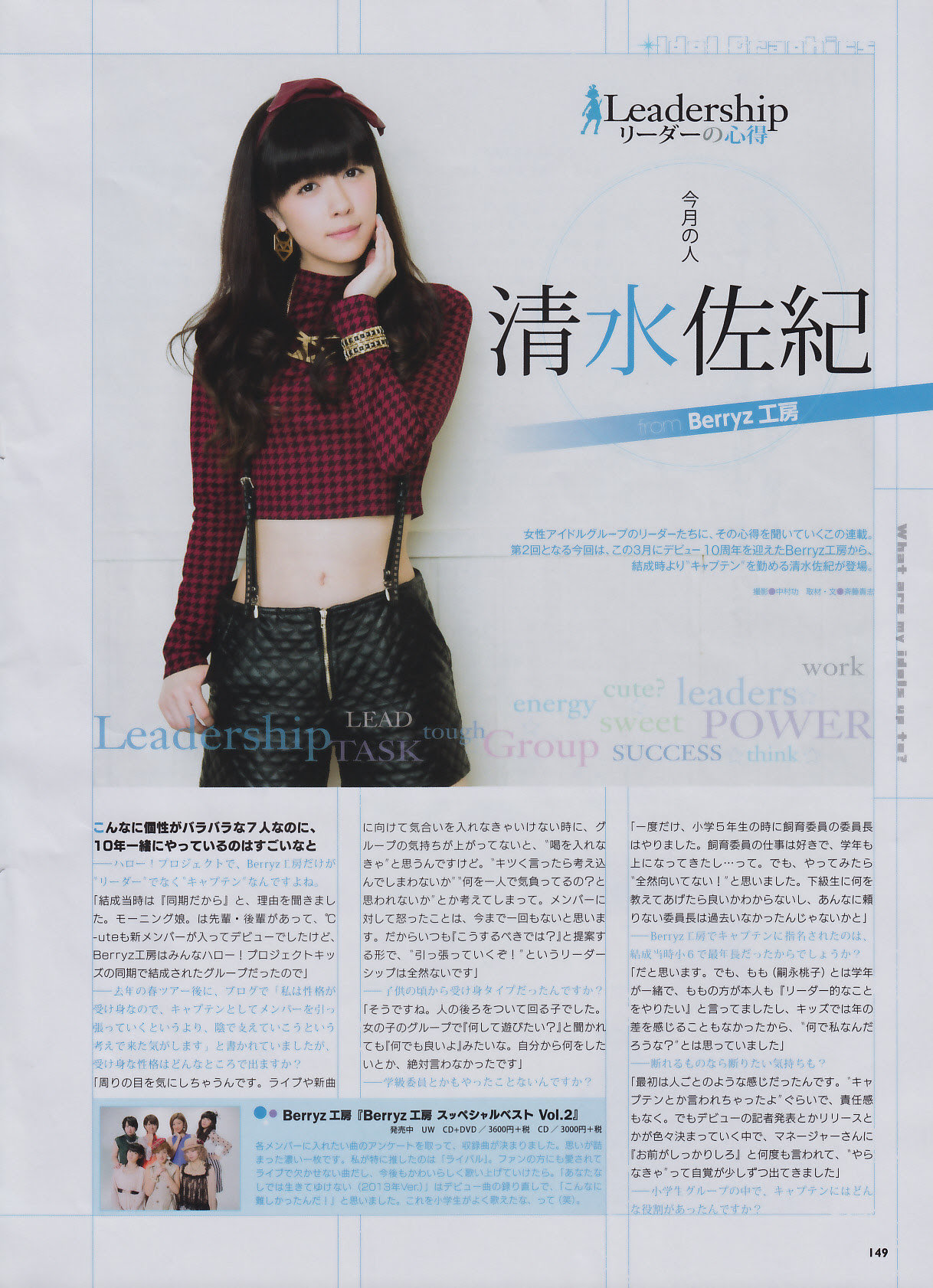 Leadership: The knowledge of a Leader
This month: Shimizu Saki from Berryz Kobo

In this serialisation, we seek knowledge from the leaders of female idol groups. In this second of this series, we present Shimizu Saki, who acts as the 'Captain' of Berryz Kobo, who are celebrating the 10th anniversary of their début in March.

If you follow me on Twitter or Tumblr (or noticed the link in the sidebar), there's a chance you might have seen me post the articles of the Tsugunaga Constitution.
I'm currently aiming for one article a day, but I thought I wouldn't clutter up this blog with what amounts to a one-liner
Instead, I'll be doing summary posts instead. These posts might include some extras I can scrounge up.
If you need your daily Momo fix, you can follow me on Twitter or Tumblr, and Ill try to keep the sidebar version on this blog updated as well.

Note that there are gaps in the articles. I guess the great Momochi didn't share them with us, so that it would lighten the burden on us fans who'll be trying our best to live up to them.

So, on with the Constitution.

{For context, this interview comes from the September 2012 edition of Top Yell magazine. This sets the interview after Niigaki Risa's graduation and the release of One Two Three/The Matenrou Show, around the time of Aitai Aitai Aitai na, and before Oda Sakura joined MM. ℃-ute themselves were still building up steam at this point, with over half a year until their labours bore fruit with the Budokan and France announcement. For even more disclosure, the version I'm using is a reproduction of the article from Top Yell +'s 2012 H!P compilation. The difference looks to only be the opening blurb and a short framing note before the interview.} 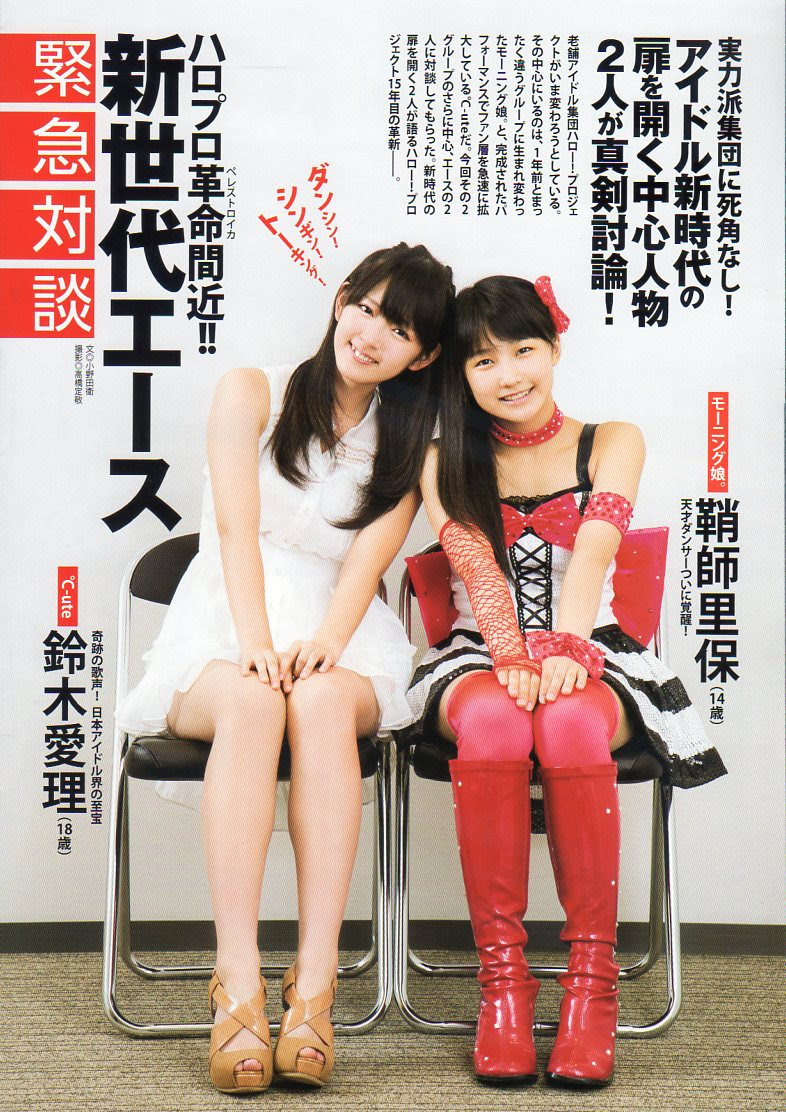 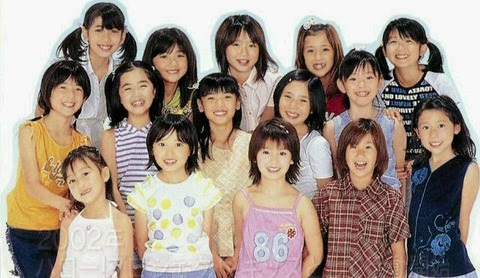 The scope of what I'll talk about will be behind-the-scenes stories concerning the auditions。
Read more »
at 14:32:00 1 comment:


@jone2601 @tsunkuboy Tsunku-san, did you expect that Airi would turn out to be so cute！？
@tsunkuboy: Expect it？ I was sure of it。

BeriKyuu on their Chou Happy Songs 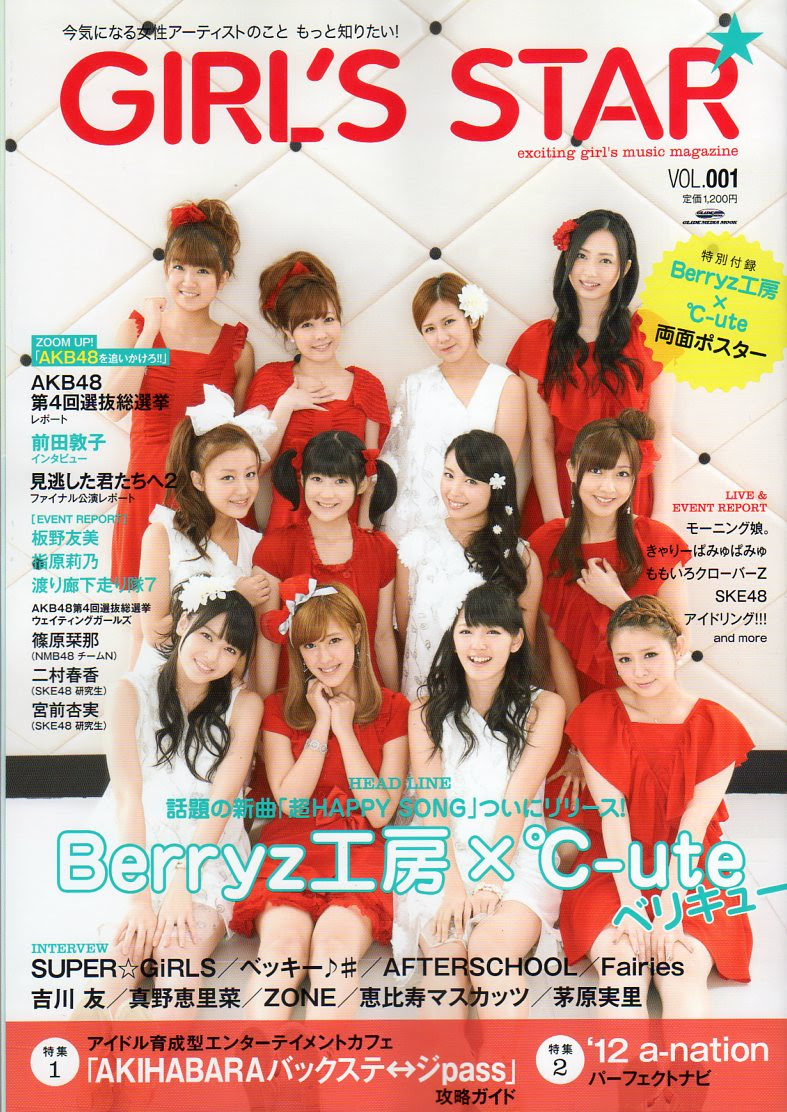 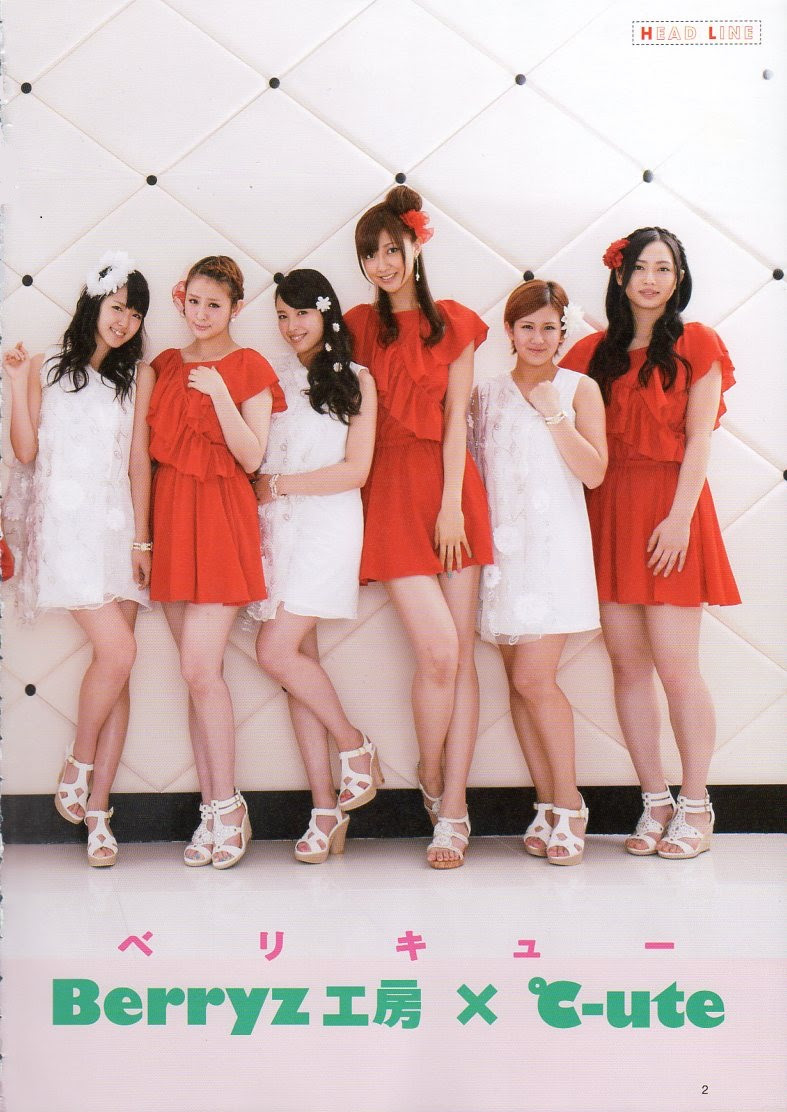 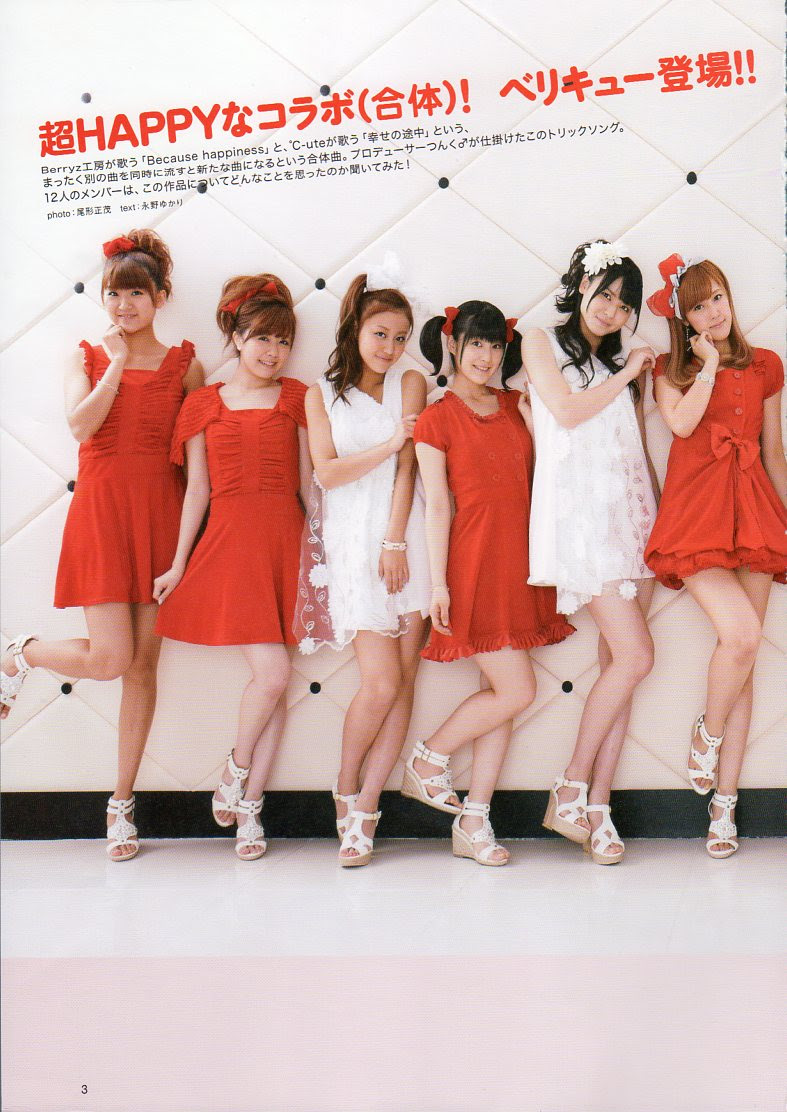 A super HAPPY collaboration (union)! BeriKyuu makes an appearance!
Berryz Kobo's 'Because happiness' and ℃-ute's 'Shiawase no Tochuu'
These completely separate songs, when played together, combine together to form a new song. This trick song was contrived by producer Tsunku♂.
Let's hear the thoughts of these 12 members on this work.

Thank you very much for always watching MUSICJAPAN。 This is the producer ShigeＰ。
Appearing on this week's ＭＪ are Berryz Kobo, celebrating the １０th anniversary of their début、 and singing their new song 「Futsuu、 Idol １０-nen yatterannai deshou！?」。
The girls had a double Ａ single this time around as well、 and I think I'd like to write about the recent abundance of 「Double Ａ-sides」 today。 The word itself is a recording industry term、 the ”supported songs” so to speak、 but it has all sorts of benefits for the fans as there are 2 music videos created、 an increased variety of CD covers、 and separate promotional activities to go to。
However、for us who are picking them out on the media side, the question of  「Which do we pick up？」 rears its face。 Usually we'd select the song based on the inclination of that artist's site、 but here the song was selected as Berryz Kobo-san had a proper reason for it 。 Thank you very much。 This time around、 we went for 「Idol 10-nen」、 as this song is a musical composition with great impact can't be sung by anyone besides Berryz Kobo-san with their unique individuality among idols。 I thought it was "something that would draw in” the hearts of the viewers with its impactful title。 It has a techno sound reminiscent of game music and karate choreography、 and you can hear the whinny of a horse from time to time lol No one besides Berryz Kobo can sing these kind of songs, songs brimming with originality。
Actually, the previous time they were on MJ, I had requested 「ＲＯＣＫ Erotic」 for their double Ａ-side performance。 Initiallty it was to be 「Motto Zutto Issho ni Itakatta」、 and we even received messages from fans recommending it as 「The music video is extremely cool, so we would like to request for this」、 but immediately after I watched the music video for 「ＲＯＣＫ Erotic」 I was struck speechless by the ”Gothic lolita ＆ Takarazuka-like” concept、 and this was just before the recording、 but I changed the song selection since I wanted this song no matter what。 It caused various difficulties since at that time, it had been a while since they had worn those outfits for the MV filming。 What was going through my mind during Berryz Kobo's performance at the time was that、 in this present age where we are at the peak of video as a media form、 a ＴＶ music programme has to show its individuality。
And、 Berryz Kobo sang another song, 「Loving you Too much」。 For this programme, the theme was 「marriage」、 so Chris Hart-san、Kiyokiba Shunsuke-san、and Kobukuro-san、 they all song songs related to marriage。 The first thing that came to my mind when I thought about ”Berryz Kobo and marriage” wasn't 「Watashi no Mirai no Danna-sama」 {Trans: My future husband}、but 「Loving you Too much」。 I believe those who are already married will understand、 but if you look back on your wedding, the days surrounding the wedding ceremony would be the ”peak period of bliss”、 wasn't it overflowing with happiness？ I think that anyone who listens to 「Loving you Too much」  will feel that sense of happiness as it's an exquisite song brimming with ”euphoria”、 so it was sung this time around。
１０ years since Berryz Kobo's debut、 they've released ３５ singles so far。 Through what they've cultivated so far、through their  "individuality ”breakthrough and an overflowing ”euphoria”、 I hope it'll fascinate the fans、 and that they'll continue to give their support。 After all、normally、 do idols last for １０ years！?
Source
at 19:06:00 No comments:

Iikubo Haruna (19), Ikuta Erina (16), and Michishige Sayumi (24) from Morning Musume＇１４ appeared on MBS Radio 'Youngtown Doyoubi' hosted by personality Akashiya Sanma (58) on the 31st. Iikubo and Ikuta complained that, compared to leader Michishige, they had no work.

The two of them started of by mentioning to Sanma 'Michishige-san has work, but...', making an appeal for their work-free schedules, 'For us, these 4 days, we haven't had anything besides voice training', 'Looking at our schedule, we've got many free days'. They revealed that they were perplexed by 'In a year, we've got so many resting days'.

Sanma tried to cheer them up by saying 'It's hard-earned, so isn't it great, you could go on (overseas) trips'.

In addition, the eldest Michishige Sayumi will be graduating from MoMusu。 in the autumn tour.

Today's broadcast was recorded in the capital in the 30th. Sanma touched upon the topic of the AKB48 handshake event assault on the 25th, where Michishige and the rest discussed, 'They got through despite all the precautions', 'It's grave, due to a lone person (the perpetrator)'.

Note: For reference, here's a clip of that radio show: