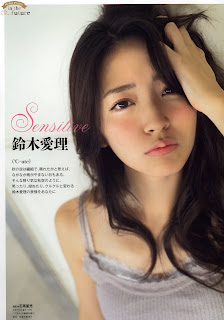 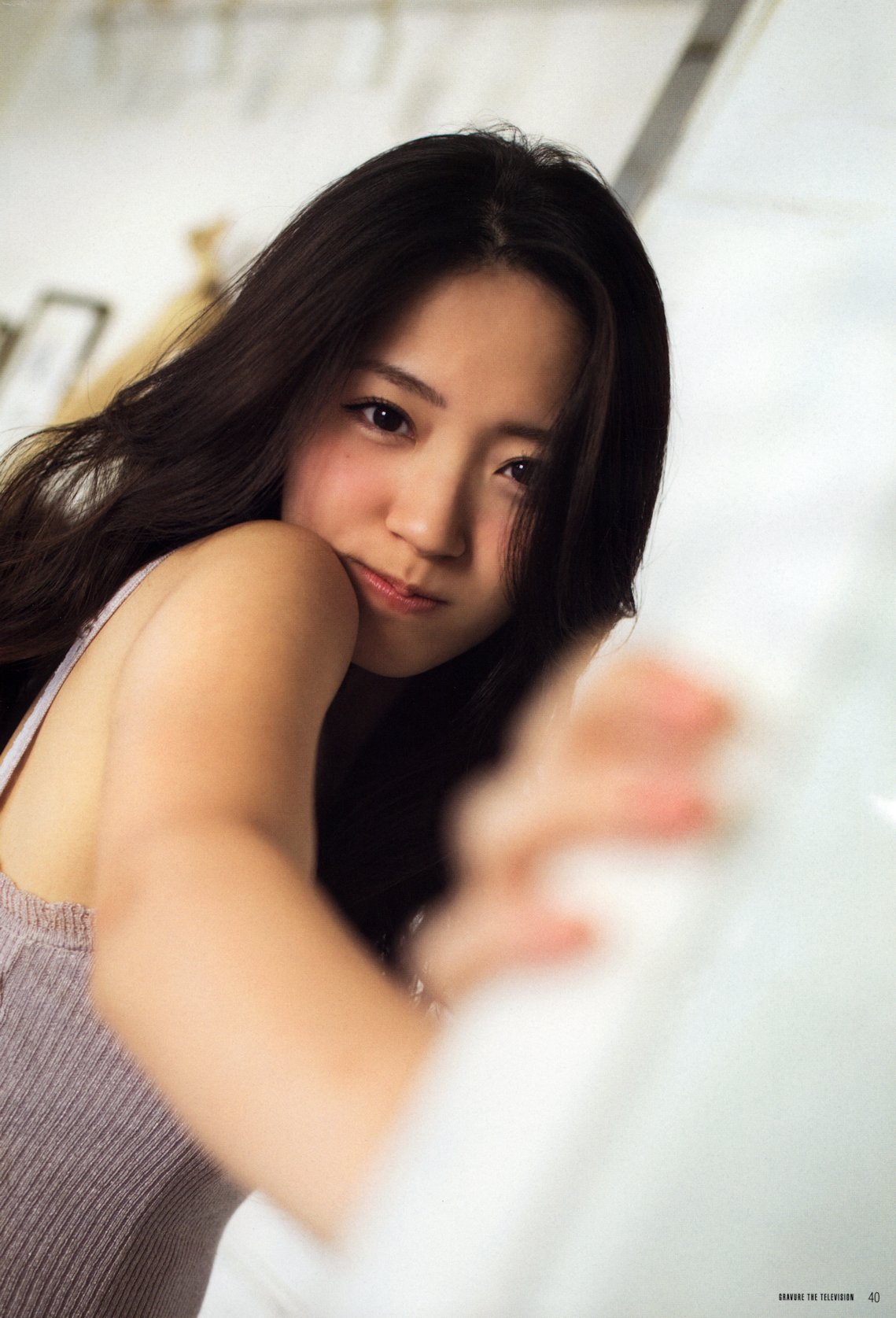 [Omitted: Discussion about how ℃-ute contributed to their 2014 autumn tour and about their latest single The Future/I Miss You]

Both songs (The Future/I Miss You) are songs about the conflicts of youth, but Airi-chan, are you currently going through a period of time where you yourself are thinking about various things?

Hm~, Morning Musume。´14's Michishige Sayumi-san will graduate and Berryz Kobo will enter their hiatus as well,  and thus ℃-ute will become the oldest sisters in H!P. Recently, a lot of people have been telling us that we'll be taking the lead, but we're like 'Eh!?' Looks like we've hit that age. Without us realising it, you could say that we're being pressured by our surroundings.

In the past, there was a period when we were called the fresh ones, but time has passed since then. With increasingly more young blood in H!P, there was a time when we thought that we could give them a run for their money in terms of perkiness, but true youth can't be beat (laughs). So recently, we've been emphasising on the things that we've built up, thinking that it's better if we do it in ℃-ute's own way. 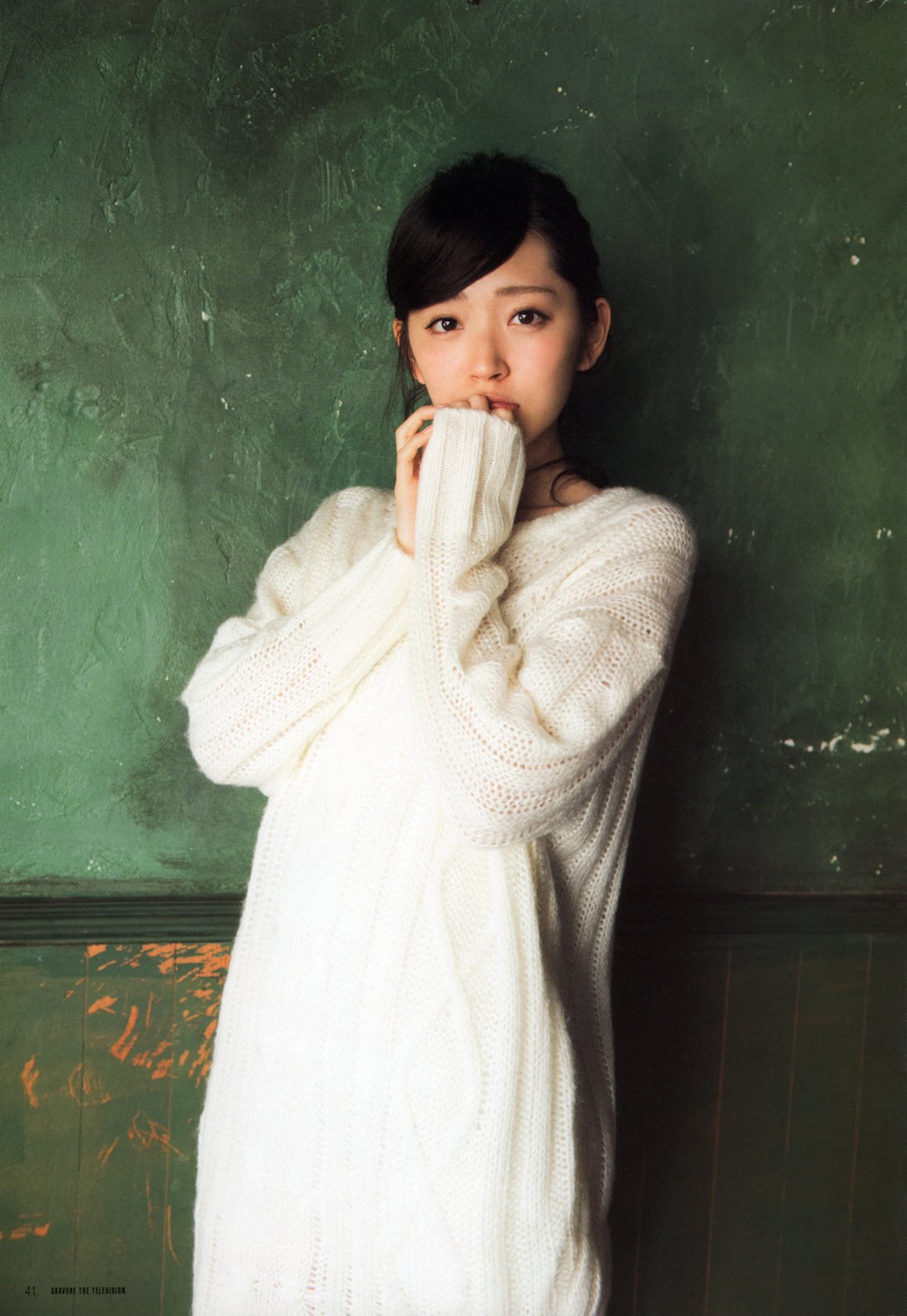 ℃-ute's change in position [to become the oldest group in H!P] comes off the heels of the hiatus of Berryz Kobo. How did you receive that announcement from your contemporaries?

Not just sadness, I was flooded over with emotion, my tears wouldn't stop flowing. But as contemporaries, we wanted to make memories together with them until the very end. Berryz Kobo gives us opinions that stem from a different viewpoint compared to the dance teachers and the fans, so it's unbelieveable that we'll no longer have that, and I can't imagine a Hello! Con without them. There's more new members, so we're wondering, what's going to happen to us!? We've turned into Santa Claus. Like we're carrying lots of baggage.

Ah, nothing... (blushes). But it really does feel like that!! We're said to be standing at the forefront of increasingly more new girls.

Yup, we remain the only ones who know about H!P's unsparing era, so we have to teach the others about the courtesies that we ourselves were taught by the senpai. But I'm no good at putting those into words, so I've got to become a senpai who can teach them through my actions. And that's why I don't mess around (unleashing a torrent of puns or funny faces) at photo shoots any more!!

Hahaha! That sort of guidance is important as well, but on the occasion of Takahashi Ai-san's graduation from Morning Musume。, she entrusted you with the ace baton. Isn't it time for you to run all out with that in hand?

Whoa, that's scary~  But I got a message from Tsunku♂-san the other day. Having watched our September Budokan, he said 'Isn't it about time that Suzuki becomes preeminent? Do your best.' I was like 'OMG!', but honestly I was really happy. He gave me heaps of praise, 'I think you can go further. Please plunge on even further ahead', and I don't want those expectations to go to waste. So thinking lightly about it, when I reach the peak of H!P, it would be nice if I gave out an atmosphere like Takahashi-san (laughs). 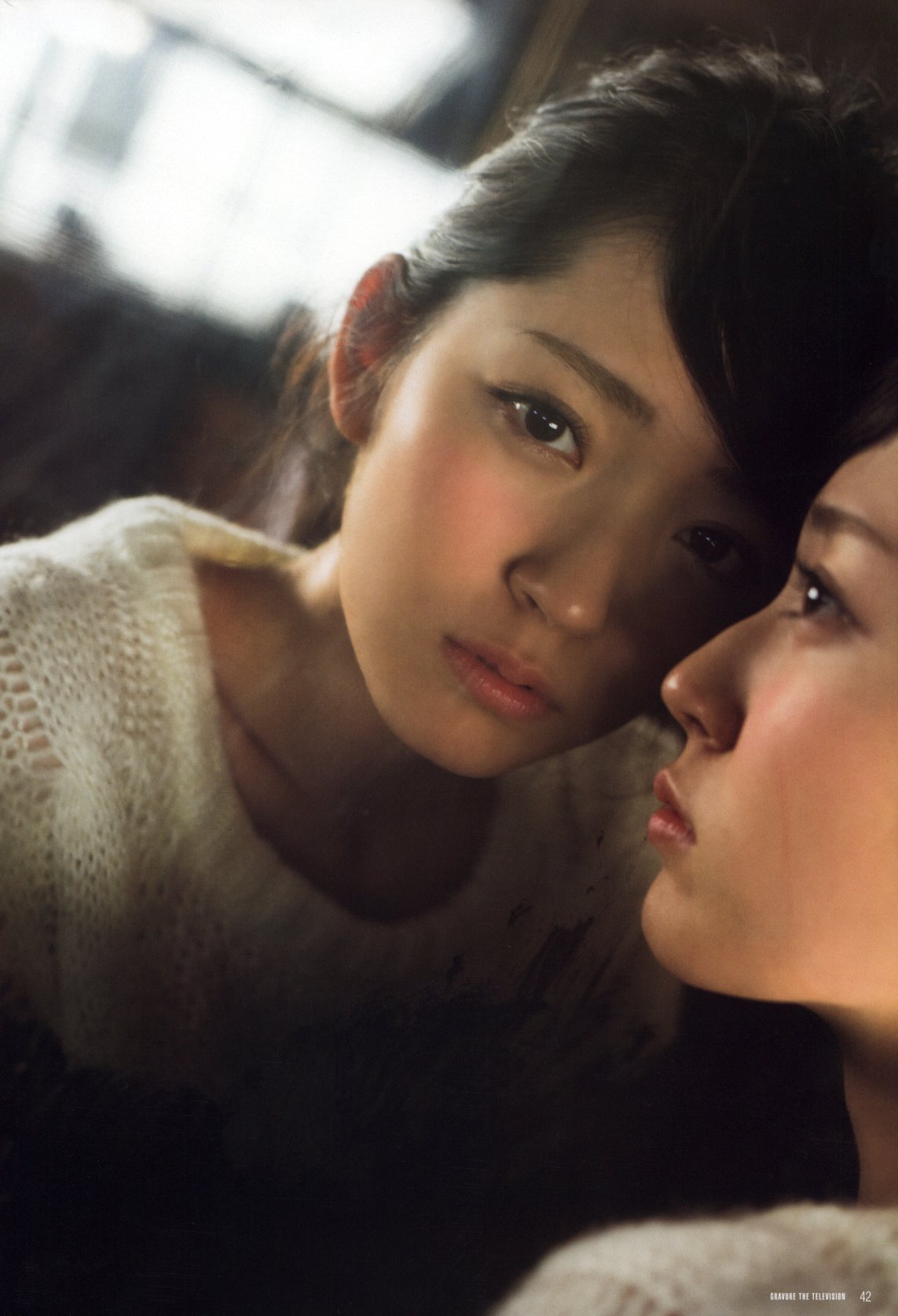 Recently, even other idols have been saying that 'Suzuki Airi-san is the one who shines the greatest amongst the idols of the present', so I'm sure that this is the period when you're in your prime {lit. filled with fat, i.e. when a fish is at its most delicious}.

Like I'm a yummy fish (laughs). While I feel I had the strongest awareness as an idol when I had short bangs, I feel like I've become stereotypical once I grew my bangs out. I feel like my mood changes with my bangs. Age-wise, one's prime would be when they're 18, but I'd like to do my best to continue on sparkling (laughs). So as I take in the opinions of the fans, I want to try the things I want to do while opening up a 'Suzuki Airi World'!

And what is that Suzuki Airi World?

The fans have told me that it would be nice for me to have some sort of contrast, so while having that, I think that I should be a woman with a mature, dignified aspect to me as well.

That is so, retaining a distinctive character. For example, something like the smoothness of your pronunciation.

Argh, I'm always doing my best to pay attention to the nerves of my mouth throughout interviews! But there are always things that you can't catch, aren't there!? To everyone, I'm so sorry (bitter laugh). 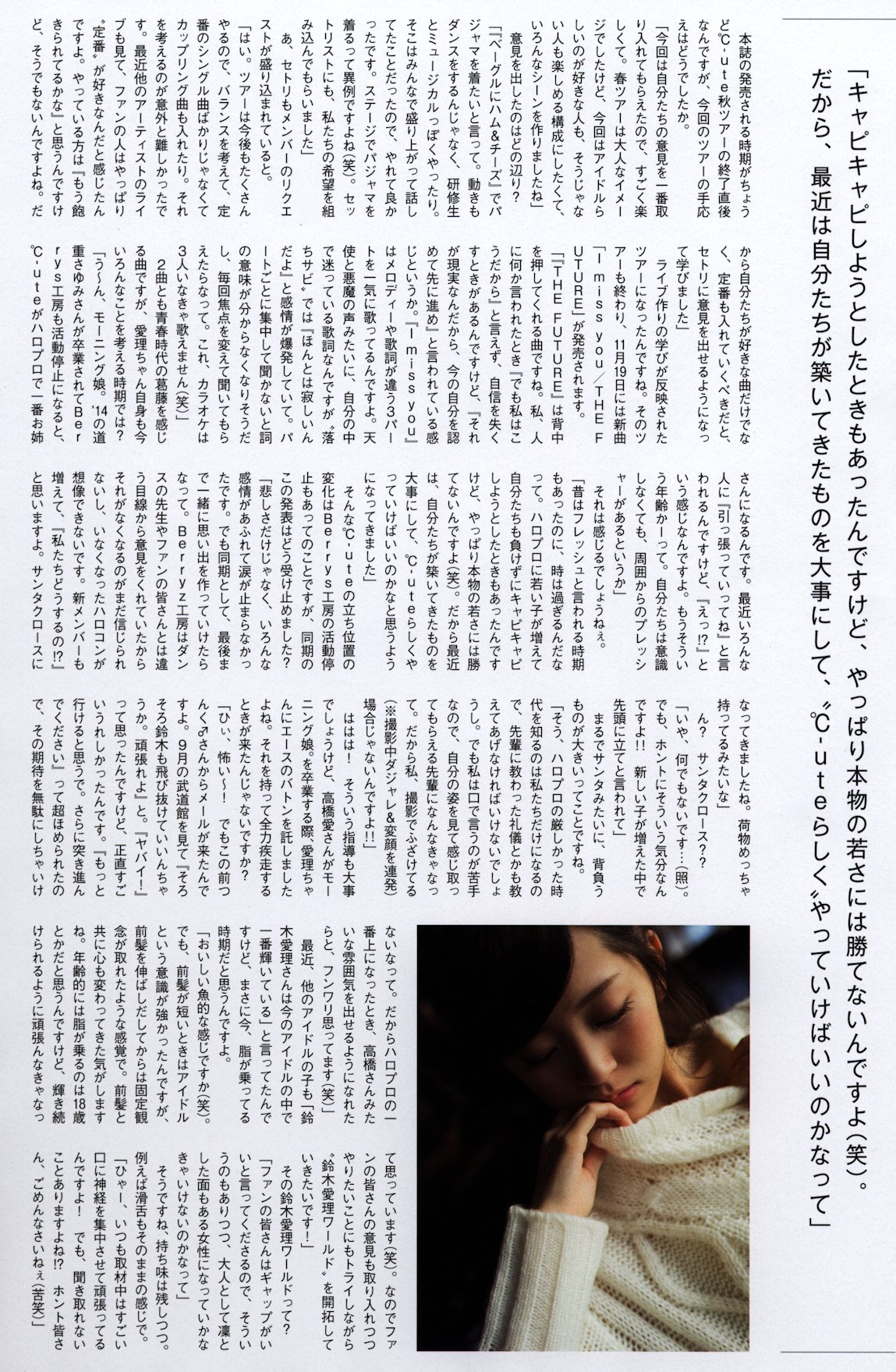 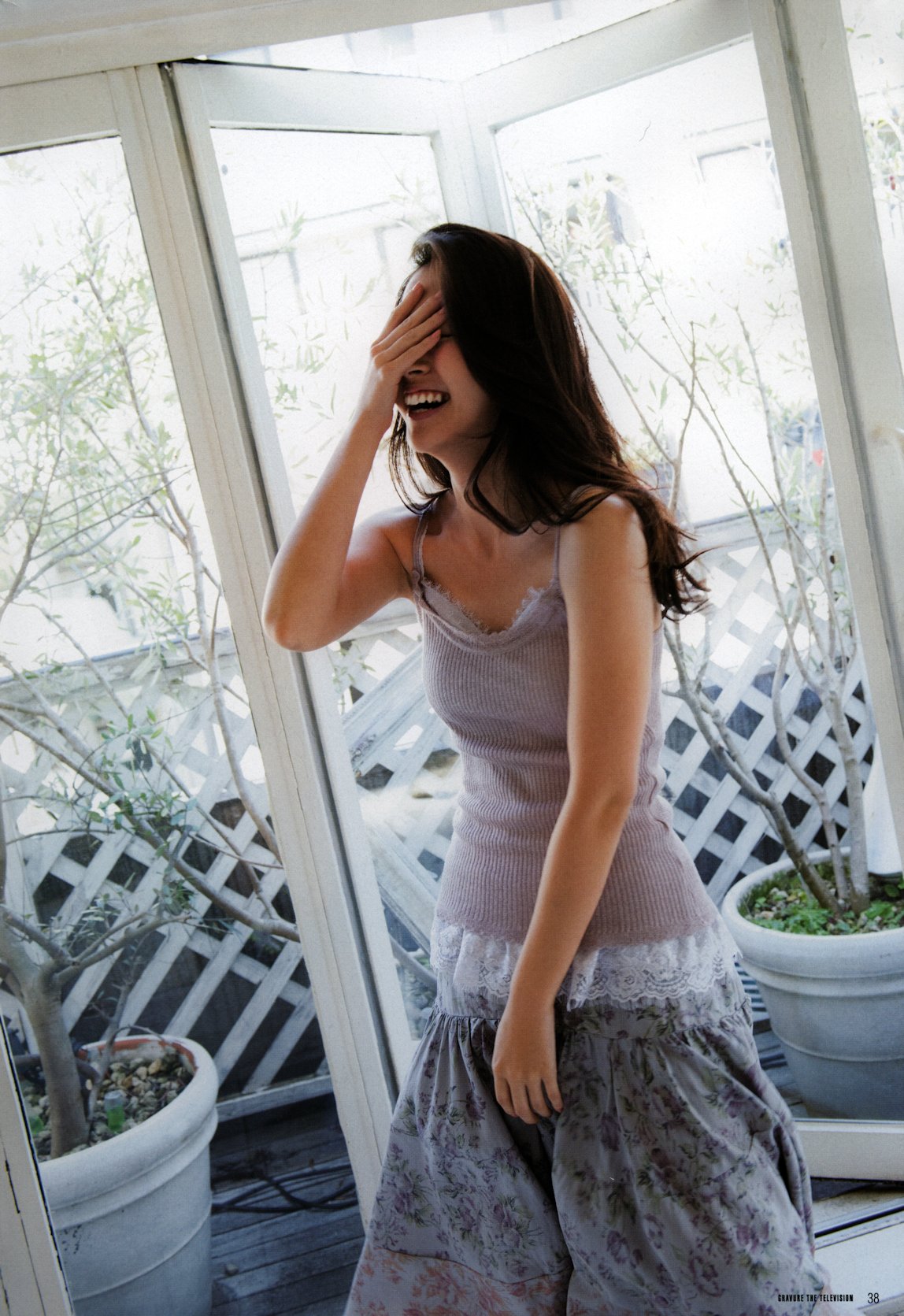