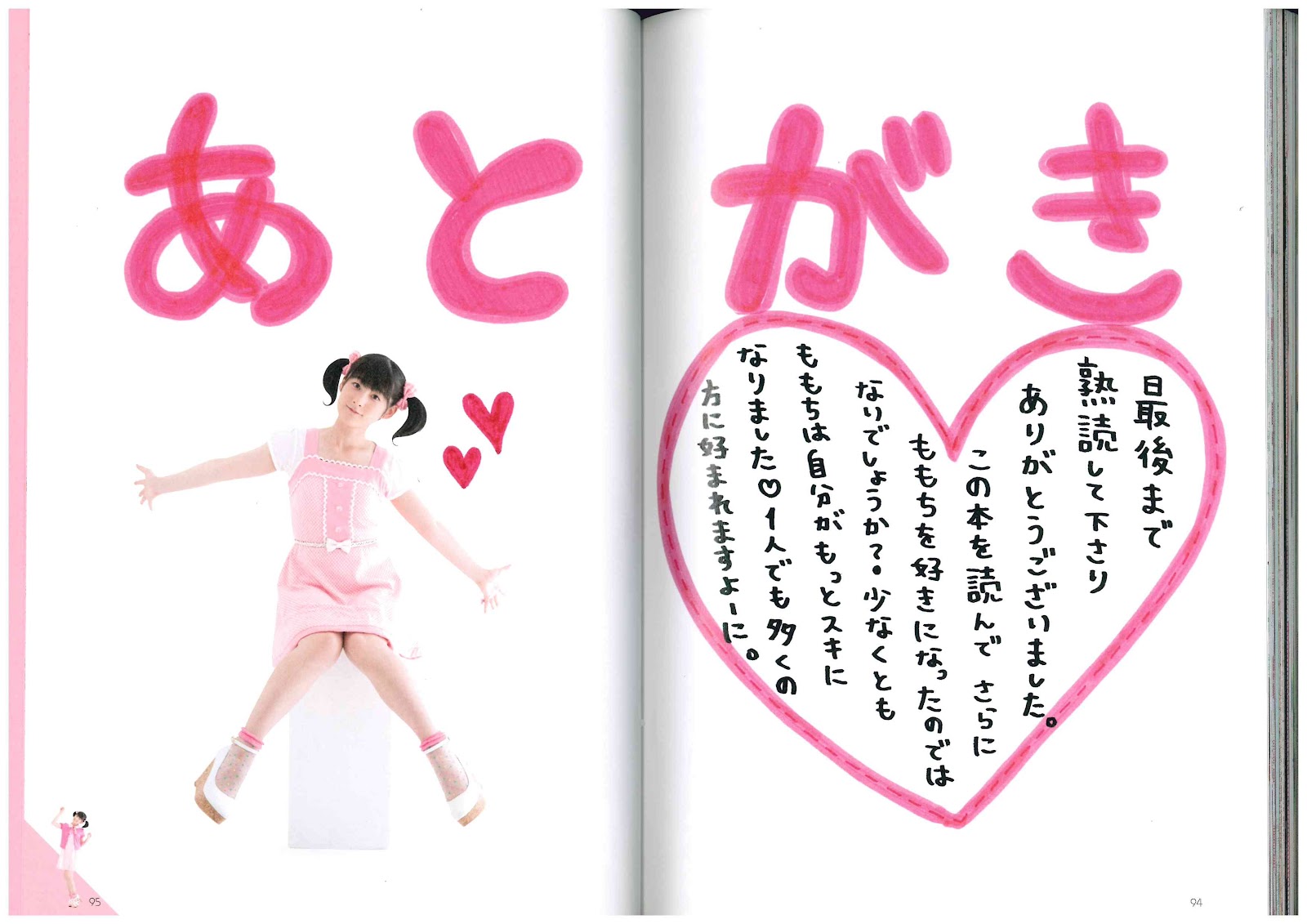 Thank you very much for enthusiastically reading until the very end.
Didn’t you come to like Momochi even more by reading this book?
At the very least, I came to like myself even more ♥
I hope that as many people as possible enjoy it. 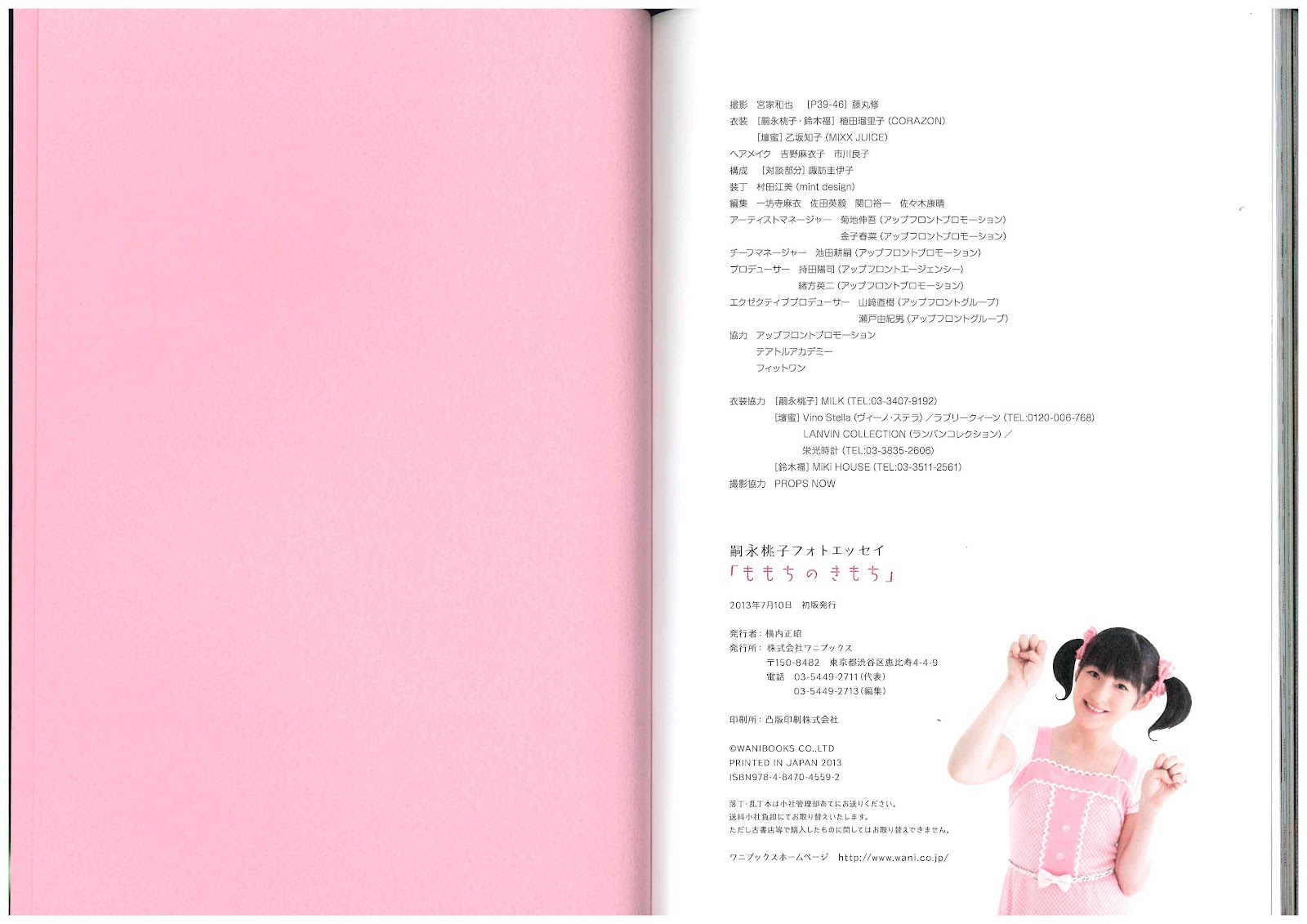 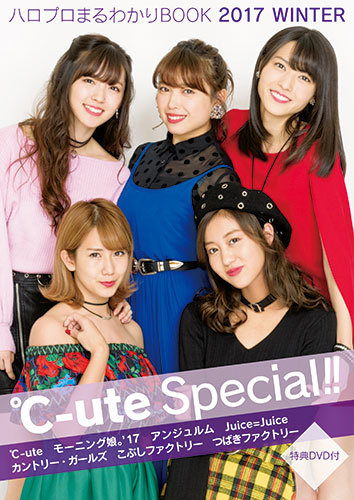 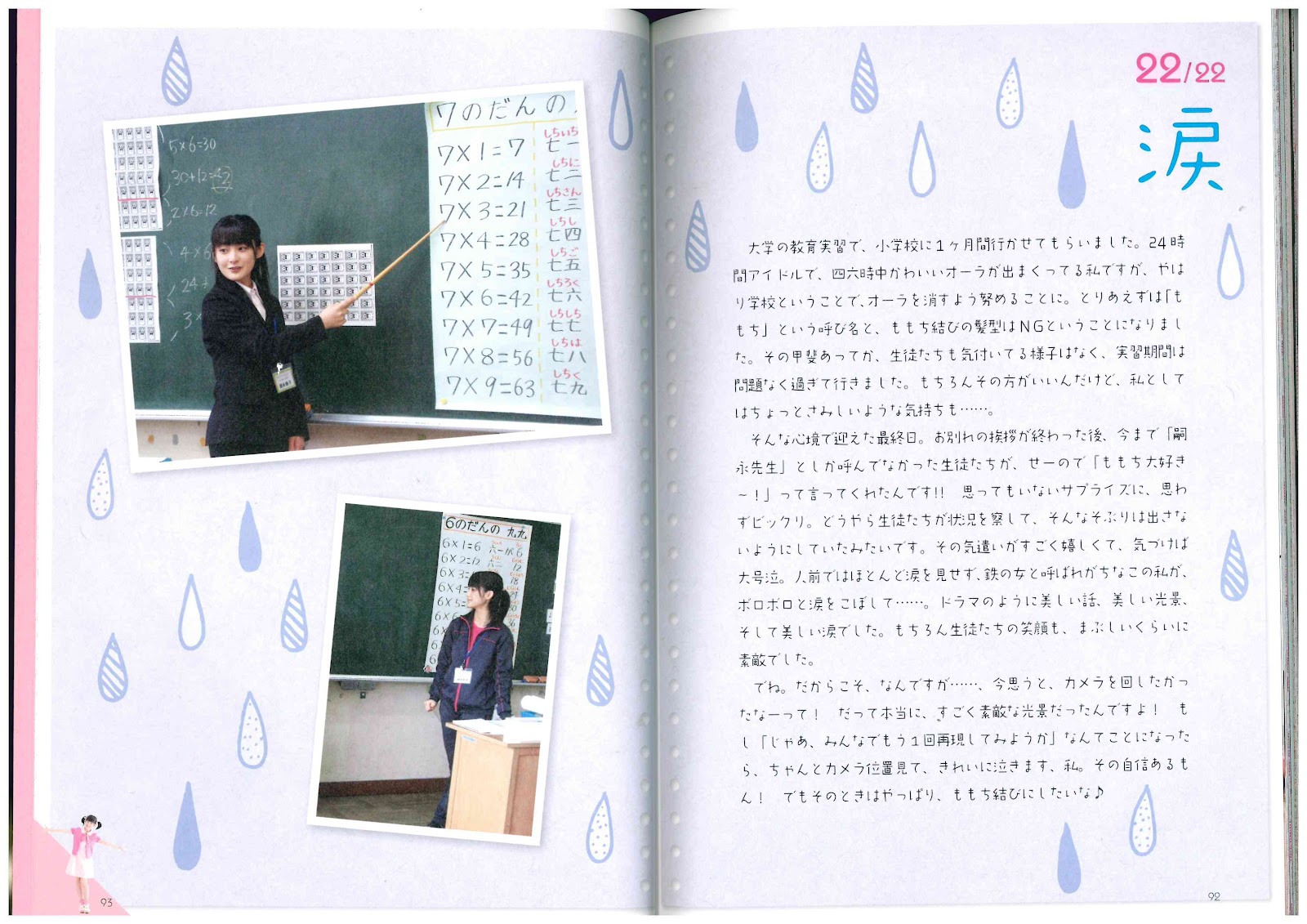 I got to go to a primary school for a month to do practical teacher training as part of my university studies. I’m an idol 24 hours a day, and my aura of cuteness shines bright around the clock. But since I’d be at school, I’d have to work hard to conceal that aura. At any rate, the nickname ‘Momochi’ and the Momochi Musubi were no-nos. As a result, my students didn’t seem to have noticed, and my teaching practice went by without a hitch. Of course it was better that way, but to me, it felt a bit sad, like a piece of myself had been taken away from me……

In that state of mind, I approached my final day. My students had never called me anything but ‘Tsugunaga-sensei’. But after I had said my farewells, with a ‘one two’, they said ‘We love Momochi~!’ I hadn’t expected this surprised, so I was caught off-guard. No matter when I dealt with my students, I’d tried not to let that part of me show. I’m known to be an iron-hearted woman, who would hardly, if ever, show my tears in front of people. And yet, I was crying buckets…… Like something out of a drama, it was a beautiful story, a beautiful scene, and they were also beautiful tears. The smiles on the faces of my students were of course so wonderful that it was almost blinding.


You know. Because of that, how do I put this…… Thinking about it now, there was a camera when it happened! Since it was really a truly lovely scene! Perhaps if we had given it another try, I would have properly looked at the camera, and cried nicely. I’m confident that I could pull it off! But I definitely would like to be in the Momochi Musubi if we did that ♪


More from this book 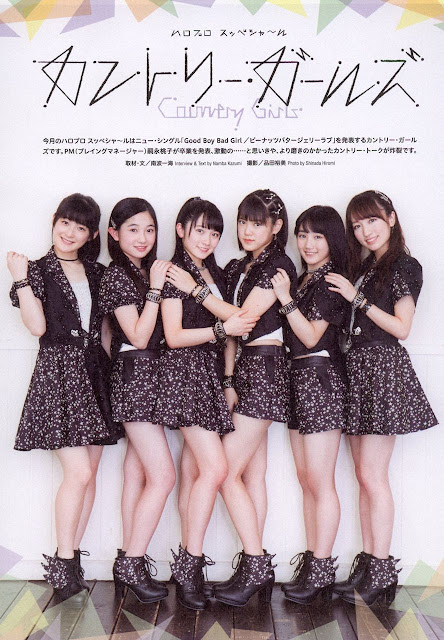 Tsugunaga-san, this might be the last time you'll be appearing in this magazine.

And with that, I think it would be nice if things moved along as usual. 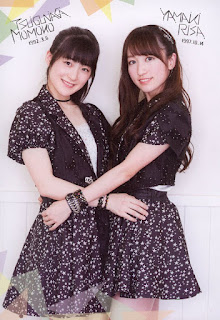 So when you go out for meals, it's normally Tsugunaga-san who extends the invitation? Is it difficult to ask her out without some sort of underlying reason?

Yamaki: Actually, there isn't a problem with inviting her out without any reasons. But I find it difficult. I can't just ask a great-senpai out for a meal without a reason. The other day, the two of us went for mushroom nabe. I felt like having some, but it turned out that the others weren't big fans of mushrooms when I asked them. I didn't want to drag along people who weren't really fond of mushrooms, so I asked Momochi-senpai whether she'd like to have mushroom nabe. She was okay with that, and she was fine with me asking her out. I was actually really shocked by the fact that there weren't any problems with me asking her out for a meal on a private basis. And though we happily headed to the store, (looks at Tsugunaga) she turned peevish.

Tsugunaga: I was really happy that Risa-chan extended an invitation to me. It's not uncommon for me to have a meal with the kouhai, but the invitation would generally come from me. That was the first time that Risa-chan had asked me out, so I was on cloud nine as we headed to the store, with a spring to my step. I was even having fun picking things out from the menu. But then I got embarrassed at how excited I was. Could it be that perhaps Risa-chan had something to discuss with me? Now that my graduation's set in stone, she'll become the oldest in the group, so I wondered if there was some sort of problem concerning the group.

Like she may have wanted to ask you something.

Tsugunaga: That's right. I was wondering if there was something she wanted to bring up. To find out if she wanted to talk with about something, I asked her why she'd invited me out. And so it turned out that it was because none of the other members liked mushrooms that much. I was like 'Huh?' (laughs) I'd been chosen via the process of elimination. And what's more, she added that nabe isn't something she could order without at least 2 people.

I'd have thought that Tsugunaga-san would have been the first person to ask. (laughs)

Yamaki: And that's where we differ. I didn't think that it would be all right to ask Momochi-senpai out without a reason. If I'd told her that I just invited her for some vague reason or the other, it'd be awkward.

Tsugunaga: You could've just said that you wanted to have a meal with me.

Tsugunaga: You just happened to want mushroom nabe, and I happened to be the only person who was convenient, right?

Yamaki: ...Well, that's true, you happened to fit the bill. That is a fact. (laughs) The big takeaway I got from this huge incident was that it's fine to invite Momochi-senpai out just because I want to have a meal with her. So I'd like to ask her out for more meals until her graduation. 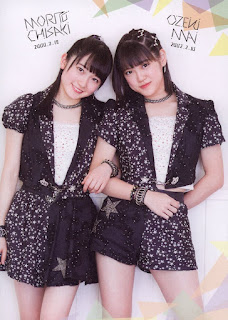 Momochi no Kimochi: The statement that changed my fate (Essay #21/22) 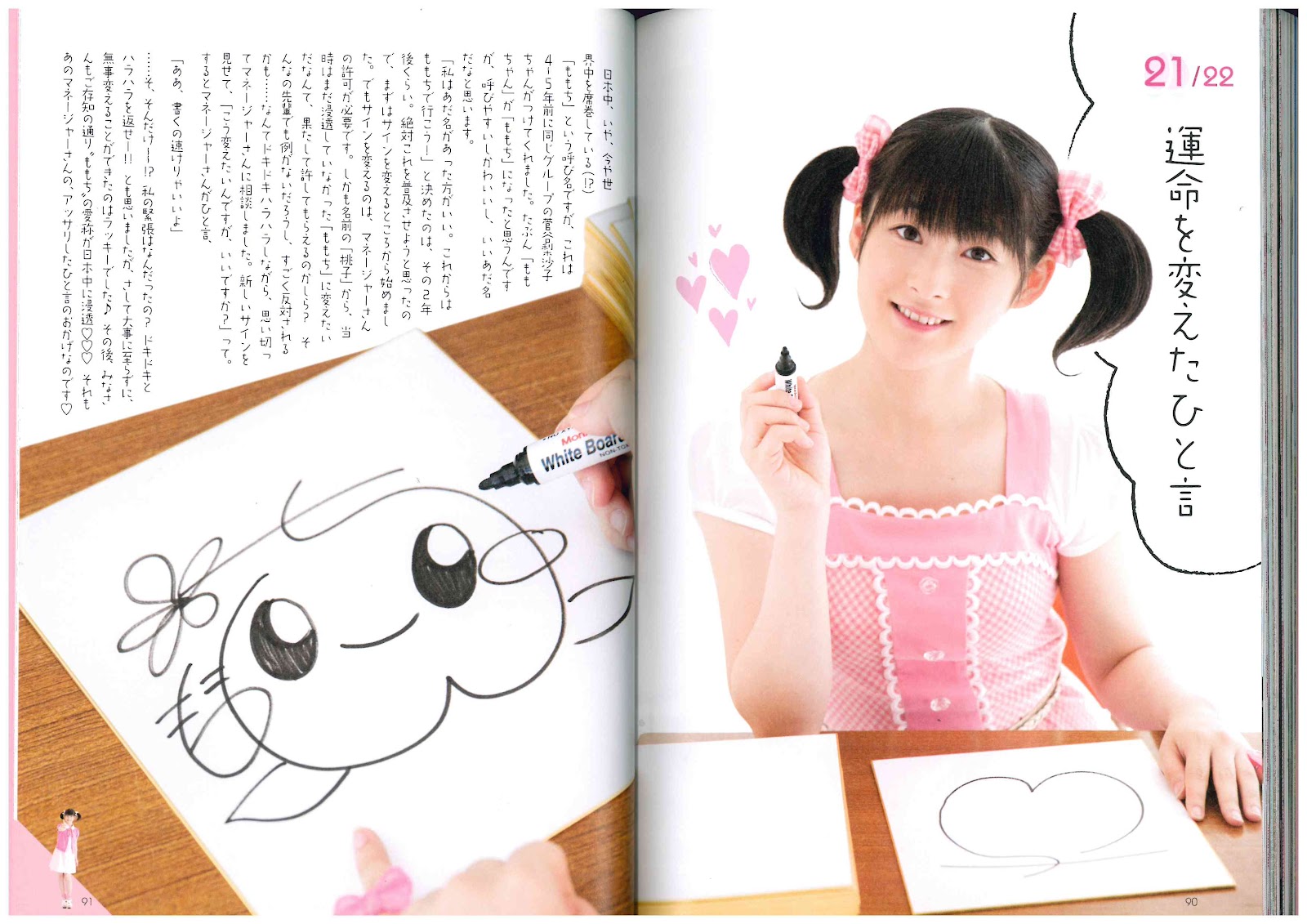 I’m now known as ‘Momochi’ all over Japan, or should I say, throughout the world (!?), but it was given to me by my fellow group member Sugaya Risako-chan about four or five years ago. She probably turned ‘Momo-chan’ to ‘Momochi’, but it was cute and rolled off the tongue, so I thought that it was a good nickname.

It was about two years later when I decided that I’d fare better with a nickname, that I’d be Momochi from then on. In order to spread the word, I started by changing my signature. But I would require permission from my manager in order to change my signature. And what’s more, given that my nickname had yet to make its mark at the time, would they really allow me to change from my name ‘Momoko’ to ‘Momochi’? There weren't any senpai that could act as a precedent, so perhaps they might be really against it…… With my head all in a mess, I discussed it with my manager-san. I showed my manager my new signature, asking whether it would be all right for me to change my signature like that. And my manager uttered the following statement:


…...T, that’s it~~!? What was the point of me getting so worked up about? Give me back that sense of panic I had wastefully used up!! But I was lucky that I got to change it without too much fuss ♪ And as you all know, the nickname ‘Momochi; has spread throughout Japan ♥♥♥ And that’s thanks to the lightly-made statement by that manager-san ♥


More from this book