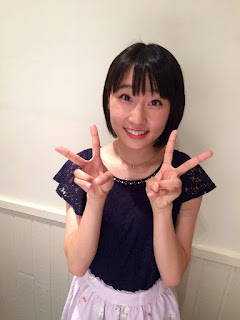 ♪ Ruru was very shy when she was small, so her mother sent her and her sister to a performance school. Ruru had always liked singing, but she couldn't sing in front of people, she'd only sing at home.

♪ Sayashi-san was what got her into Morning Musume。Ruru went to every Musume concert that happened in Hiroshima after Sayashi joined.

♪ Once she joined the Kenshuusei, Ruru was surprised at how much emphasis was put on capturing the rhythm. At the school she had previously attended in Hiroshima, the focus was more on singing with personality.

♪ With many of the girls from her generation getting into groups before her, she had thought about quitting. She'd actually gone out and said that she wanted to quit three times. But when asked in return if she'd quit if that were the case, she'd reply 'It's not like I particularly want to quit!' and keep at it. She's competitive, and is the type who doesn't want to quit until she gets some sort of result.

♪ Haga Akane-chan's debut was the most surprising to her. She was more mentally prepared for the debuts after that.

♪ When her group had yet to be made known, the Musume would have been her first choice. But she was happy to have gotten into Juice=Juice. Juice=Juice hadn't crossed her mind as a possibility because the group had never taken in new members before.

♪ On Yanagawa - Ruru: That machine gun chatter is crazy.

♪ Her goal in Juice=Juice
Ruru: I want to be doing work where I always bring smiles to people's faces, so I hope to become someone who can provide smiles and energy through my singing and dancing!

♪ Bonus from the 47 questions segment
What's the origin of your name?
My older sister is Riri, so I became Ruru.