{Note that the interview itself was conducted on the 22nd of September, a week before the 12th gen were revealed at the Nippon Budokan. Also, included in the compilation is a short discussion between MaaDuu and the interviewer while they waited for Sayu to show up, which doesn't appear in the pages of the magazine. The interviewer even alludes to their pre-interview discussion near the end.} 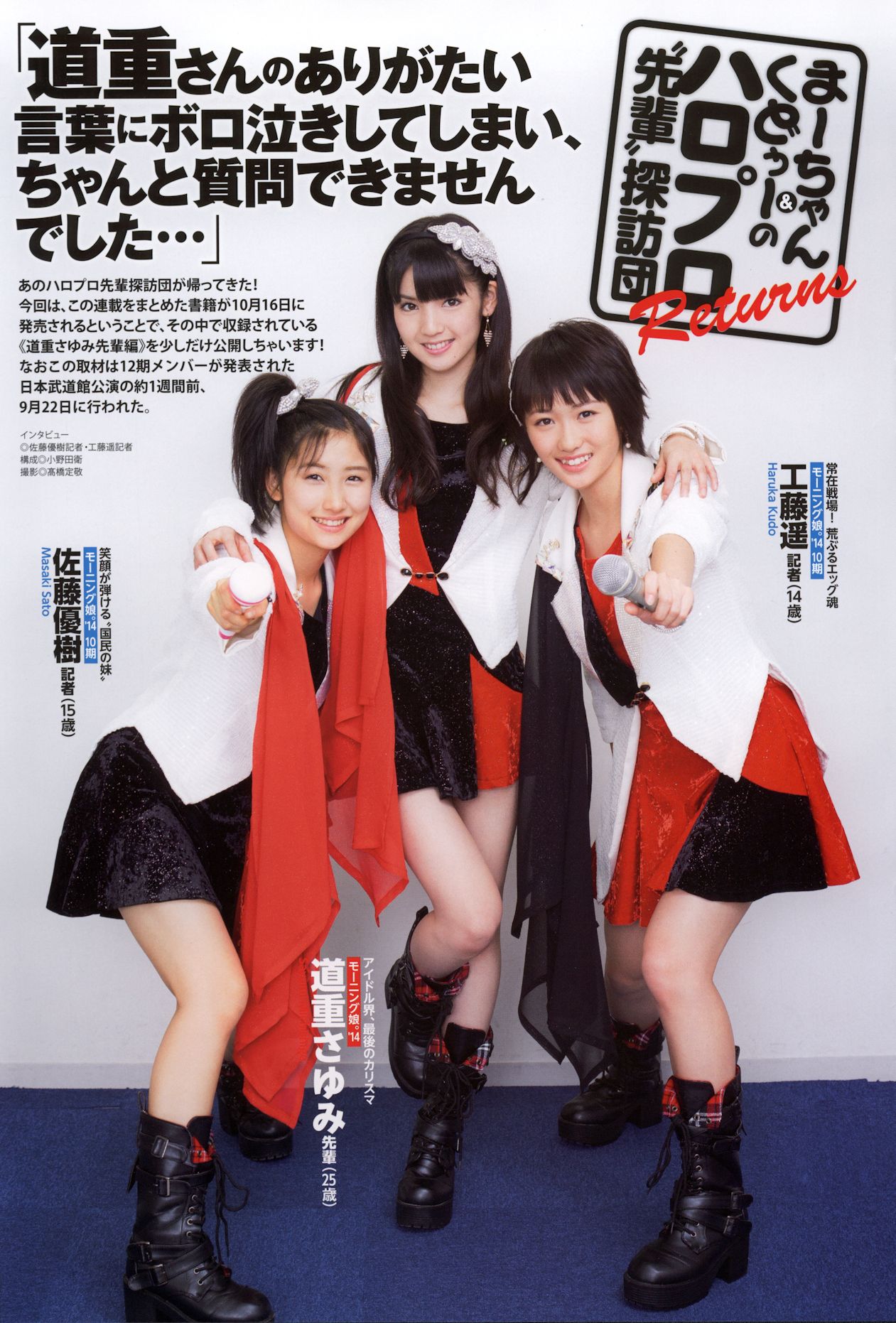 ---[H]as your impression of Michishige-san changed  from the time of your début?

Sato: At first, I was really scared of her. It was the same for Minishige-san, Tanasa-tan, Niigaki-san, Takahashi-san... I was scared of all of them. 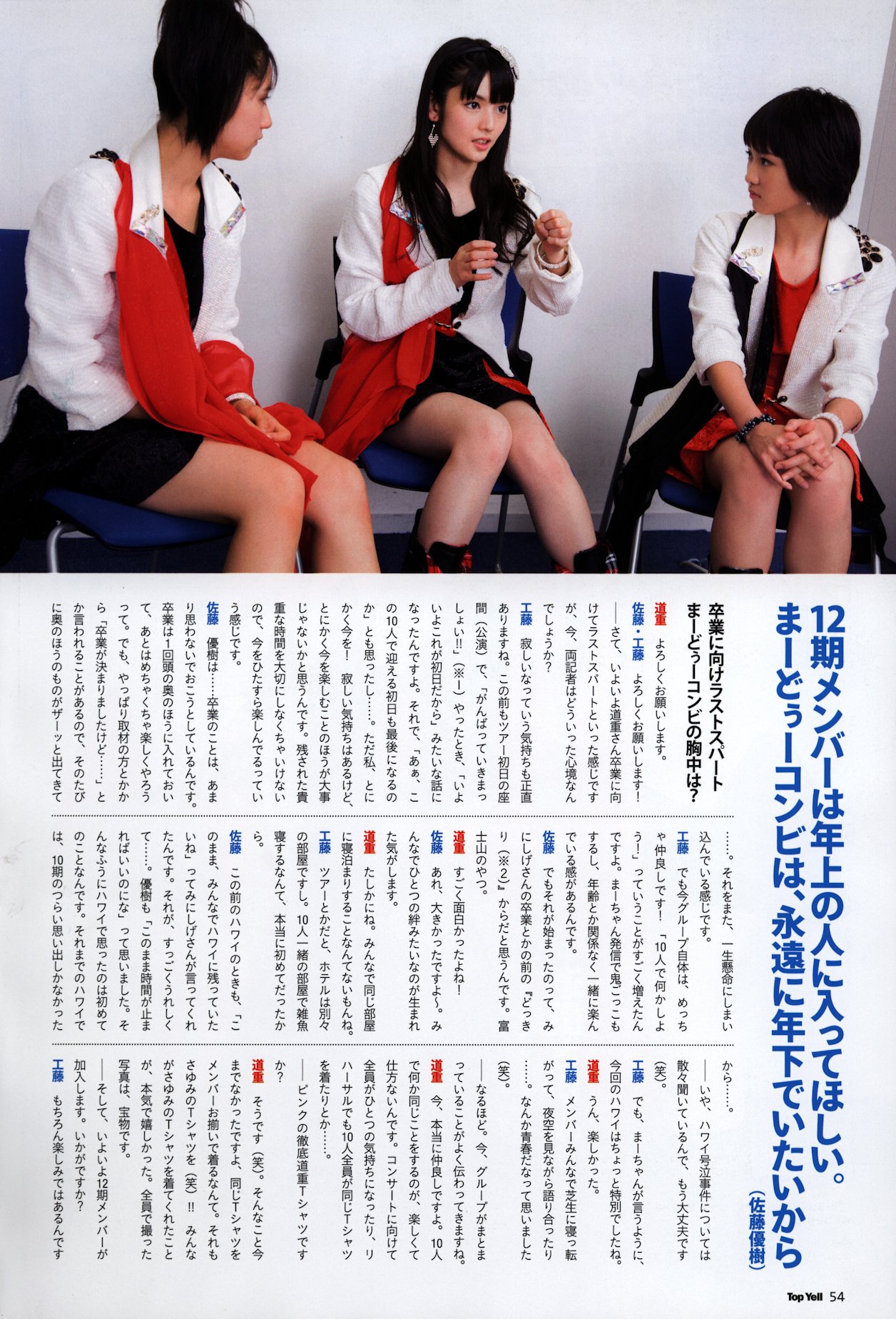 I want people who are older than us to join as 12th generation members.
Since I want the MaaDuu combi to eternally be junior in age
(Sato Masaki)

In the final stretch towards her graduation, what's in the hearts of the MaaDuu combi?


Michishige: Pleased to be working with you.

Sato & Kudo: Pleased to be working with you!

Well then, it feels like we're gradually getting into the final stretch towards Michishige-san's graduation. Currently, what's in the mind of you two journalists?

Kudo: Honestly, it feels sad to part. At the opening day of the previous tour, in Zama, when we went 'Ganbatteikkimasshoi!', we started talking about how we're finally starting on the opening day. Then, I thought, 'Ah, this is the last time we'll be starting off on an opening day with this combination of 10 people'... But for me, right now! Even though I feel sad, but at any rate, isn't enjoying the moment even more important? Since we have to treasure the remaining, valuable time, I feel like we should earnestly have fun now.

Sato: For Masaki... I don't really think about the graduation. When the idea of graduation gets into my head, I'll go and make sure I do something that's tons of fun. But, there are times when interviewers mention 'The graduation has been decided...', and every time, there's like a flash that comes out from within me... That makes me feel like I've got to stow it away with everything I've got.

Kudo: But in the group itself, we get along really well! 'Let's do something with the 10 of us!', the number of times we do something like that has really increased. We've played tag based on Maachan's suggestion, and I think that it's most fun when we're doing things where stuff like age doesn't matter.

Sato: But I think that it started from the 'Dokkiri' before Minishige-san's graduation. The one at Mount Fuji.

Michishige: That was really interesting!

Sato: That was huge~ I feel like that was the birth of the bonds that tied us as one.

Michishige: We don't really lodge together in the same room.

Kudo: When we're doing tours and the like, we get separate rooms at the hotels. So it really was a first for all 10 of us to sleep bundled together in a room.

Sato: When we were in Hawaii the other day, Minishige-san went, 'I want remain in Hawaii with everyone, just like this'. That made me really happy... Masaki thought that 'It would be all right if time would stop just like this'. It's the first time I've thought that way in Hawaii. Since up to then, the 10th gen has nothing but painful memories....

Well, I heard that the crying incidents in Hawaii were severe, but it's already all right (laughs).

Kudo: But, as Maachan says, this Hawaii trip was a little special.

Michishige: Yeah, it was fun.

Kudo: We all lay down on the grass, and talked while looking at the night sky...I thought that it felt kind of youthful (laughs).

I see. It really gives a good picture of how now, the group is united.

Michishige: Currently, we really do get along. Whenever the 10 of us are doing the same thing, we can't help but have fun. In preparation for a concert, everyone's feelings become united, like all 10 of us would wear the same T-shirt at a rehearsal.

Michishige: That's right (laughs). That's never happened before, all the members matched up wearing the same T-shirt. Plus, it was Sayumi's T-shirt (laughs)!! It made me seriously happy that everyone wore Sayumi's T-shirt. The photos of all of us matching one another are my treasure. 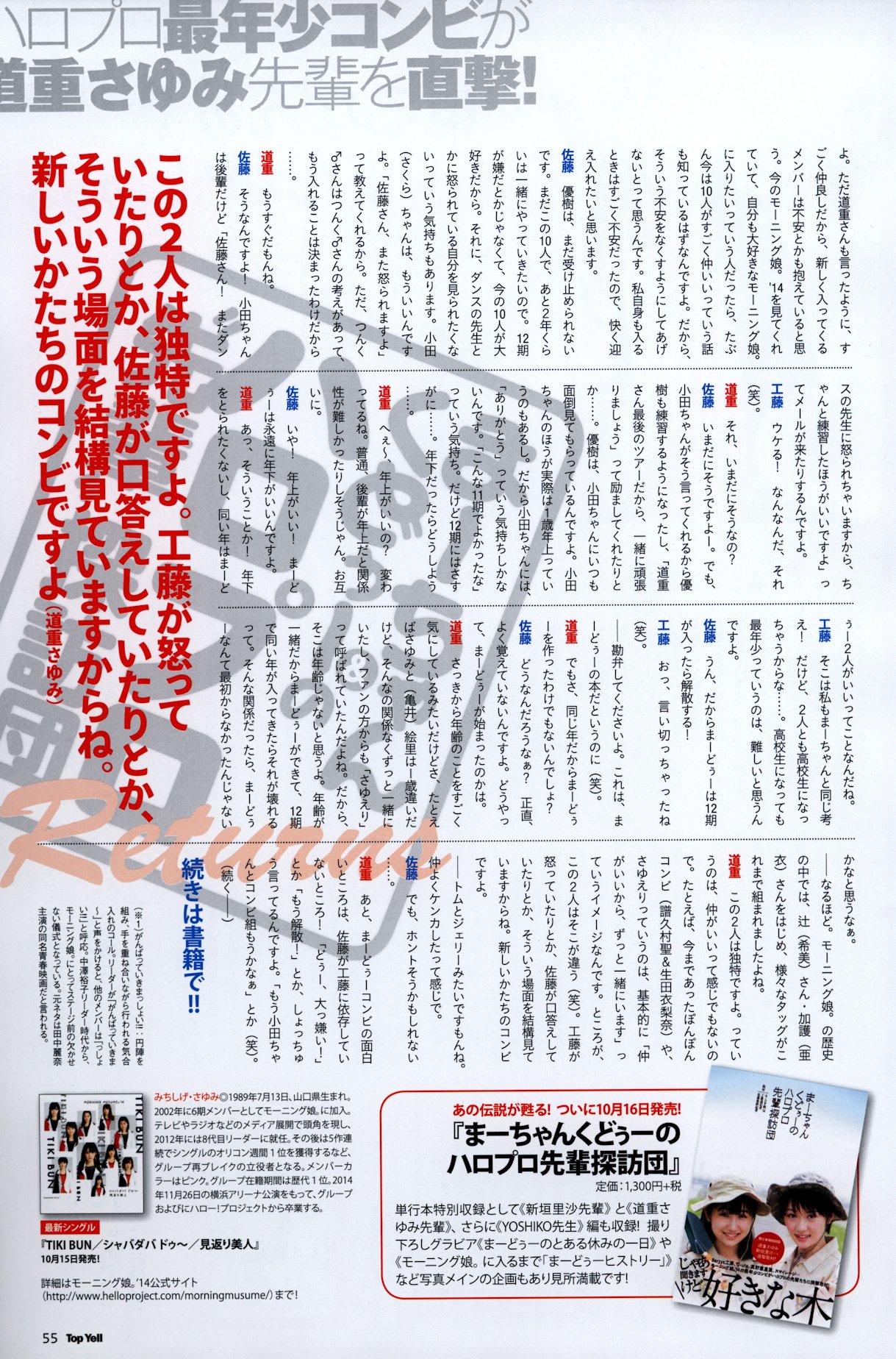 And, the 12th generation members are about to join. How do you feel?

Kudo: Of course we're looking forward to it. It's just that, as Michishige-san said, we're really close, so the newly joined members might harbour anxieties.  If they're someone who wants to join Morning Musume. because they've come to like us by watching the current Morning Musume.'14, I expect that they'll probably be familiar with the stories that the current 10 of us are really close. Therefore, I think that we have to make it so that they'll be able to lose those anxieties. I myself was really worried when I joined, so I want them to come in with a warm welcome.

Sato: Masaki still hasn't got to grips with it. Since I'd like to go on for about 2 years with the current 10 of us. It's not that I dislike the 12th gen, but I love the present 10.

Sato: And I also feel that I don't want them to see me being told off by the dance teachers. It's still all right with Oda-chan. Since she instructs me with a 'Sato-san, you got told off again'. However, Tsunku♂-san has his own way of thinking, and decided that new members would be joining...

Sato: That's right! Oda-chan's my kouhai, but she sends me messages like 'Sato-san! You got told off by the dance instructors, so it would be better to practise properly'.

Kudo: That's hilarious! What's up with that? (laughs)

Michishige: Is that still the case even now?

Sato: It still is! But because Oda-chan says things like that, it makes Masaki practise, encouraging me with 'Let's do our best together as it's Michishige-san's final tour'...... Oda-chan keeps an eye out for Masaki. Oda-chan's actually an (academic) year older than me. So I've got nothing but gratitude for Oda-chan. I feel that it's great to have this sort of 11th gen. But the 12th gen will definitely be... younger in age, so what can I do......

Michishige: Eh~ older ones would be better? That's different. Normally, your relationship with a kouhai that's older would be trickier. Mutually.

Sato: Nope! Older would be better! It would be nice if MaaDuu were eternally the youngest.

Michishige: Ah, so that's what it is! You don't want them to take away your title of youngest, it'd be better if it was MaaDuu who are the same age.

Sato: Yup, and so MaaDuu will breakup when the 12th gen join!

--- Please bear with it. This is for the MaaDuu book, after all (laughs).

---[Within] the history of Morning Musume., starting from Tsuji-san and Kago-san, all sorts of tag-teams have been put together.

Michishige: These 2 are unique. Since it doesn't feel like they're on great terms with one another. For example, they're unlike the pairings we've had so far such as the PonPon combi (Fukumura Mizuki & Ikuta Erina) or SayuEri, there this definite image that 'Since we're good friends, we're always together'. For these 2, that's what's different (laughs). Since we often see scenes where Kudo gets mad, or Sato makes a retort. It's a new form of pairing.

Michishige: Also, what's interesting about the MaaDuu combi is that Sato isn't dependent on Kudo! Always saying things like 'Duu, I hate you!' or 'Let's disband!' Or 'I'll make a new pair with Oda-chan' (laughs).

--- While waiting for Michishige-san to come, these 2 were discussing something on the lines of 'Being uneasy about graduation'.

Michishige: I see...... Morning Musume. is constantly evolving, since it's a group where new entries and graduations happen repeatedly. I myself have seen numerous people off so far. Numerous senpai and contemporaries. Every time, there's this voice asking 'Will it be all right?' Particularly during the graduation of my closest friend Eri, and the graduation of that star performer Aichan, I heard those words from those around me. At Gaki-san's graduation, I would become the leader, so my heart was thumping hard. But, for Morning Musume。´15....... We can become 'The Morning Musume。 of that time'. The present Morning Musume。 are the 10 of us, but after my graduation, in a real sense, you'll be making 'The reborn Morning Musume。' Since the ones making it... will be the 2 of you. It'll be all of you. But, it'll be all right. Because I believe that since it's you guys, you can do it, I decided that I would graduate. I've got no worries. Since if it's all of you, it'll be all right.