The HaroPuro MaruWakari Books are released in conjunction with the twice-yearly Hello! Con tours. The contents usually take the form of questionnaires to the members, asking about other members.
This one, which came out for the 2015 Winter Hello! Cons, would be Berryz' last as well as Country Girls' first. It also pre-dates Kobushi Factory, who were announced at that Hello! Con itself. Thus, the usual questionnaires are supplemented with a Berryz Kobo Last Maruwakari special as well as a new faces special (MM 12ki, S/mileage 3ki, the 5 new Country Girls).

This questions come from the Berryz Kobo Last Maruwakari special, where we get one last, deep insight into the girls before their hiatus. 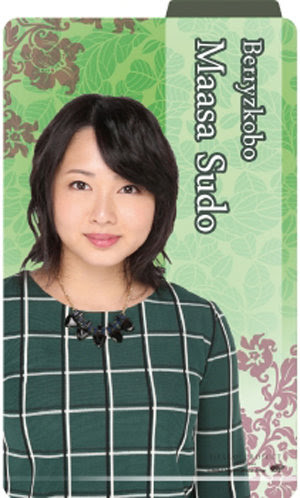 'Happiness~Koufuku Kangei!~'
I get to sing the part ♪Anata ni Deaeta (I met you), and it makes me happy when the fans sing it by changing the 'anata' (you) to 'Maasa' ♥

'Chotto Samishiina'
We sang this at our 2014 autumn tour, but the more I listen to it, the more I think it's a wonderful song ♥

'Towa no Uta'
The extremely wonderful lyrics make your chest squeeze! It's a song I love

Q2. The activity that left the biggest impression after 10 years of activities as Berryz Kobo
I think that Berryz Kobo holds the 3rd place position in Hello! Project. However, the only ones to wear fish outfits are Berryz Kobo alone! Even when we're messing around, we're doing it full power, so every day is enjoyable!

Q3. Memories with the members

Shimizu Saki: She has this image of being level-headed as she's the Captain, but she really does pamper you. ♥ So I talk about all sorts of things with Saki-chan, and get pampered ♥

Tsugunaga Momoko: Her skilfulness at talking is off the charts, and I think she really watches the members! She's unexpectedly serious (laughs).

Tokunaga Chinami: We do silly things when we're together (laughs). I think that it's because both of us have completely opposite personalities that there's harmony. My source of energy!

Natsuyaki Miyabi: She clearly states her own opinion, and together with Captain, she brings the group together. Miya's stylish, so I think she's the type who all sorts of girls can admire, a group which includes my younger sister!

Kumai Yurina: In my private time, I hang out the most with her, and we've bought matching outfits and goods. I get air-headed when I'm with Kumai-chan (laughs).

Sugaya Risako: She's taught me the most about singing. Even for songs I'm bad with, Risako would teach me aout things like the musical intervals, which was a relief!

Q4. I'd like to finally do this before our hiatus
I'd like to go to the members' homes! I'd like to have a party and sleepover at someone's house ♥♥♥

Q5. The things that make you think 'I'm glad to have been in Berryz Kobo'
Berryz Kobo, ranked 2.8th. I'm happy that we were able to challenge ourselves from cool to funny!