What do the girls manage in Kobushi Factory? (Top Yell July 2016) 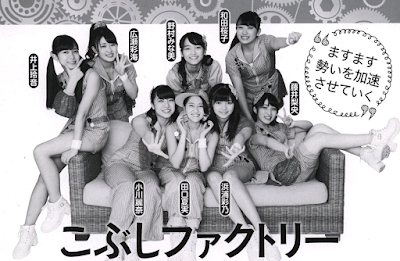 The roles of each and every one of the eight members!
What does that girl manage in this Factory?
The members themselves determined the roles!
As you might expect from the group who have inherited the DNA of Berryz Kobo, champions of 'diversity in personality', the eight members of Kobushi are exploding with 8 different flavours.
In 2016 at the moment, this is the refinement of the strongest personnel!

Fujii Rio: Factory Manager that Keeps the Time
For a while, it was me and Fujii-chan who were the ones who made sure that the group kept to time. But honestly speaking, I'm the kind of person who's no good at keeping the time. Fujii Rio-chan is the only person who can handle Kobushi's time. (Taguchi)

Hirose Ayaka: Factory Manager for Sexiness
She covers up for the sexiness that I lack, despite me being the oldest. When she sings, you can feel a sexy nuance in her expression and singing. Of course, looks-wise, I think she's the most mature looking among us. (Fujii)

Nomura Minami: Factory Manager for Cooking
She's Kobushi Factory's lunch lady. She's really good at cooking. When I hung out at her house before, she made tomato pasta for me. That was really delicious! Even the way she put together the serving made it look like something that had been dished up by a restaurant. (Taguchi)

Ogawa Rena: Factory Manager that Produces Unique Replies
Every statement of hers is miraculous. Anything and everything she talks about is weird. Like how she mistook for Asano Atsuko-san for for Yosano Akiko-san (sarcastic laugh). Simply put, her biggest charm is her ability to make you want to comprehend her. (Fujii)

Hamaura Ayano: Factory Manager who is the Boss-in-the-shadows
We actually call her the 'Boss-in-the-shadows'. On that note, she's told me, the leader, that I'm unreliable once I step off the stage. When we're backstage, the person who brings together everyone's opinions is Hamaura Ayano-chan (Hirose)

Taguchi Natsumi: Factory Manager that Provides Sweets
Deeply knowledgeable about everyone's preferences in sweets, she'll buy them and hand them out. In the middle of our tours, there have been times when she's given everyone Japanese pickled cucumbers. That sort of puzzling action is probably something that we should expect from her (laughs) (Nomura)

Wada Sakurako: Factory manager for Singing
Her singing is seductive and sweet. Her voice stretches out, completely unembellished. Kobushi Factory has a lot of girls with powerful, aggressive voices, but I think she adds some spice to the mix (Nomura)

Inoue Rei: Factory Manager for Excitement
It's common for ReiRei's influence to make all of us to grow more excited. She's quiet on-stage because she's shy though. I think the fans would be surprised if they found out about her true face! (Taguchi) 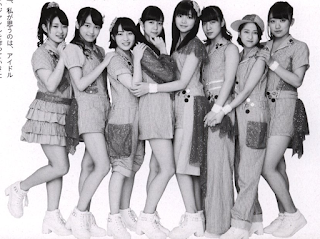 [Extra: Excerpts from the main interview]

Fujii: I think that ReiRei (Inoue) has the biggest contrast [in personality]. On-stage, she acts extremely idol-ish, but backstage, she starts doing things like making weird movements or pulling funny faces.

Ogawa: The funny faces she pulls are crazy. You really wouldn't want other people to see them.

But I'm sure that I've never seen Inoue-san look freaky in videos. How is it that such a part of her doesn't appear in front in the fans?

Inoue: Well, it's not like I'm hiding it or anything. When I get really excited, it gets to the level that my face turns into a funny face when I'm on-stage.

Hirose: In the songs we're doing in our current tour, there's a part where Inoue Rei-chan and I face one another. Without fail, she'll make a funny face when that happens.

Wada: At that point of time for that song, ReiRei faces the back. I'm pretty sure you make a funny face at that point since you think that the audience can't see it, right?

Fujii: You'll go that far to hide it?...... That's amazing. You're far more professional than me (laughs).

Hamaura: In the middle of the tour, I was given trouble countless times as well! Like Wada Sakurako-chan would suddenly charge at me like a wild boar, or Ogawa Rena-chan would hit me with unrelenting strength in the middle of MCs..... But the worst was Hirose Ayaka-chan! When we had a part where we danced freely, she gave me a kiss.

Hamaura: I really hated that! It came as such a surprise that I ended up missing my next lyrics. And on that day, despite just that kiss having drained me, for some reason, I got interrogated by Taguchi Natsumi-chan after the concert. Like, 'It wasn't mouth-to-mouth, right!? You've promised to save all your kisses until the day I graduate, right!?'... I don't even remember making that promise!

With salt being rubbed into the wound, you were stumped by her feelings of womanly jealousy (laughs). Hirose-san, with regards to your kiss, are you the type that gets overwhelmed with emotion at concerts and inadvertently does things like that?

Hirose: No, it wasn't something that occurred to me on the spot. I'd thought about it beforehand. Before doing it, I consulted with Ogawa Rena-chan. Though all she said was that she didn't know what to think about it, and that I should just do it without asking (laughs). It's just that Hamaura Ayano-chan didn't really seem to be as unhappy as she makes herself out to be.