Some notes from Aarii's press release for her second PB, 'Akari II', held on the 25th of July.

♪ She notes that this might be the last PB with her in a school uniform, while she's still a student.

♪ She thinks (i.e. hopes) that her expressions have improved from her first PB that was released half a year ago, like how she closes her eyes and how she uses her mouth.

♪ The members commented that the PB was a good PB that can be enjoyed by both guys and girls.

♪ Aarii's favourite photo. It received high praise from the members, and their usual make-up artist commented that it looked nice: 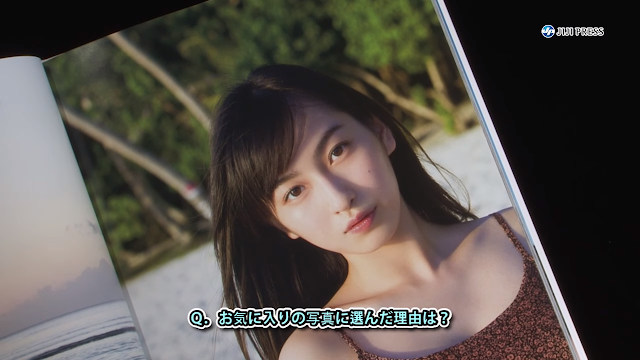 ♪ It was shot in Guam, her first time overseas for a PB. She found it difficult to enumerate the currency (US dollars and cents), so her manager had to help out.

♪ She went to Kmart when she had some time to herself. She bought body cream at a store in Guam, which came in huge sizes. She bought macadamia nuts as a souvenir for the members, which were well received.

♪ Juice=Juice's will be having their Budokan concert in November. She'd like to make use of the experience of having gone around the 47 prefectures and having performed in Hong Kong and Taipei.

♪ She's really happy to be in good health for this press release, as she had been suffering from tonsillitis when they had the press release for the first PB.

♪ For Aarii, the first half of the year went by quickly. H!P has changed in many ways as well, like the addition of Kasahara Momona to ANGERME. She's happy to have come out with a second PB. She'd like to do her best in the second half as well.

♪ She is playing Pokemon GO, and had caught five pokemon on the day itself. Pidgeys were possibly among the ones she caught. She hasn't caught a Pikachu yet. She's still level four, so she can't even go for the gyms. But as they continue on with their tours, the members are looking forward to going around and catching pokemon as they go around.  Yuka's probably the one that's made the most progress - she mentioned that she'd hit level five.


Reporter: What's the Pokemon that you'd like to catch most?
Aarii: 'Definitely Pikachu!'
Reporter: There are apparently some in Shinjuku.
Aarii: Really!? REALLY!!? Well, I've got to go there! (laughs)